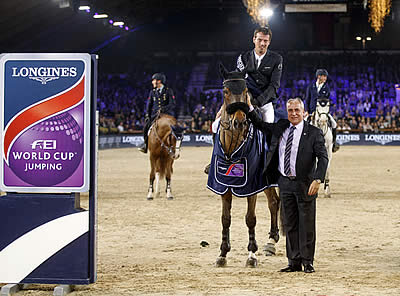 Dutchman Harrie Smolders (37) out-paced all comers to win the ninth leg of the Longines FEI World Cup™ Jumping 2017/2018 Western European League at Mechelen in Belgium. Riding the 13-year-old gelding Zinius, he set an unbeatable target with a fearless run when fourth to go in a seven-horse jump-off. Runner-up spot went to Sweden’s Henrik von Eckermann (36) who has now soared to the top of the league table while Italy’s Luca de Lorenzo (30) lined up third. Smolders was a man with a plan.

“I never won before at Mechelen and I really wanted to do it, so I was totally focused. When I got into the jump-off I just wanted to win. I was never riding for second place so I took the risk by taking a stride out to the last. And this is very special because I came here with all my family – my kids, my wife and my parents – it was an unforgettable moment and I’m very thankful to the crowd. The atmosphere here is always really intense and it gives us even more of a push to show what we can do!” — Harrie Smolders (NED)

This result with Zinius was particularly rewarding because this is a horse that is stepping up to the plate.

“He is still developing, but now that Emerald and Don (his other two top horses) are having a break he gets a chance to show in the biggest classes and he has picked it up very quickly. I’m a bit surprised that he makes it look so easy!” Smolders added.

It was no walk in the park either, with Eddy Geysemans’ tough first-round track getting the better of many of the best in the sport. The time-allowed of 67 seconds saw three miss the cut into the jump-off when picking up just one annoying time penalty, but German ace, Ludger Beerbaum, already had four on the board with Chacon before getting four more for an awkward jump at the last and then hitting the deck when Chacon mistakenly took on part of the double at fence five in the wrong direction. The man who claimed Germany’s first-ever FEI World Cup™ title back in 1993 is under medical care with an open shoulder fracture, and the horse world is wishing him a very swift recovery.

Two more former World Cup champions, Beerbaum’s fellow-countrymen Christian Ahlmann with Taloubet Z and Daniel Deusser with Cornet d’Amour, led the way against the clock with Deusser setting the standard when clear in 40.51 seconds. But Sweden’s Henrik von Eckermann and Mary Lou were almost two seconds quicker when breaking the beam in 38.74 to put it up to the rest of them. Smolders wasn’t intimidated, however, stopping the clock on 38.19, so when de Luca and Halifax van het Kluizebos were clear in 39.97 seconds and Frenchman Roger Yves Bost posed no challenge in 42.17 seconds it was game over.

As 2018 begins and with just four of the 13 Western European league qualifiers remaining, the next taking place in Leipzig (GER) on 21 January, Smolders has 25 points on the board and may re-think his new year agenda.

“I wasn’t planning to go to the Final in Paris but now we might have a meeting and set some new goals,” he said. “I will do a few qualifiers anyway and I want to get Emerald out to a few shows, maybe get him ready by Gothenburg (in February) if I can. We will see, but this win is the perfect end to a great year for me!” said the delighted winner.