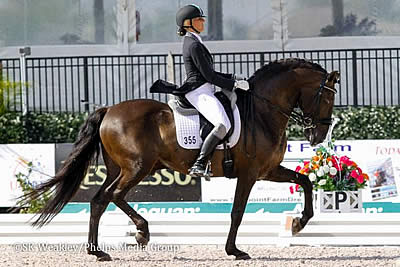 Wellington, FL – March 25, 2014 – Italian dressage rider Silvia Rizzo and Sal scored their highest score to date on March 20 in the Grand Prix Freestyle with a 70.375 percent at the Adequan Global Dressage Festival (AGDF) 11 National show. On top of that, they placed first in the Grand Prix at the show with a 68.50 percent.

Rizzo and Sal are a new pairing and are just getting to know each other. Rizzo purchased Sal, a 15-year-old bay Lusitano stallion (Mississipe-Maia, Golegã), in January 2014.

“I’m very pleased because I was looking to have him really relaxed,” Rizzo said of her freestyle. “I changed the beginning of my kür and he was much more mellow.”

Betti believes the pair’s steady improvement throughout the AGDF series can be attributed to practice and time.

“We changed some things within the design of the test,” he added. “Sometimes you need to change something. She also built on the experience of the previous competitions.”

Rizzo said she was happy with the piaffe and passage in the freestyle and rode some steps one-handed. They received an 8 and a 7.5 respectively in those movements. She noted that in the pirouettes Sal did not lose the rhythm and remained in place.

“I also received a high score for the choreography,” she said. “The judge wrote it was ‘very entertaining.'”

Rizzo said that that she and Sal are forming a great partnership.

“He was really playing with me,” she said. “He was enjoying the kür. Today my first goal was for him to have fun with me and… we did it!”

Silvia and Sal will compete in the AGDF 12 CDI3* March 27-30. In early April, they will schedule when to leave for Europe. And they will head back to Germany to Rizzo and Betti’s facility, Hof Marabunta, to resume a full competition schedule in Europe.