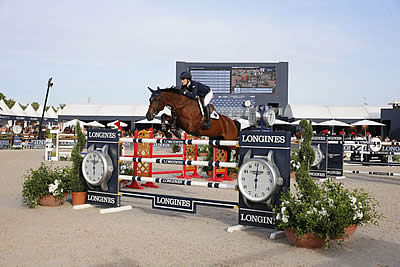 New York, NY – An A-List of the world’s show jumping stars is heading for the LGCT Finals in New York on September 27-29 on Governors Island in New York City.

With anticipation mounting, it was revealed that some of the top U.S. riders competing at the spectacular venue of Governors Island will be McLain Ward, Kent Farrington, Georgina Bloomberg, Margie Goldstein-Engle, Jessica Springsteen, and Jennifer Gates.

Every afternoon from Friday, September 27 to Sunday, September 29, the top athletes in show jumping will face off in the purpose-built sand arena and there is FREE ADMISSION for spectators who will be able to watch the competition.

U.S. rider Jessica Springsteen, who won last weekend’s LGCT Grand Prix in St. Tropez, spoke of the excitement surrounding the event in New York, near where she grew up with her dad Bruce and mom Patti in New Jersey. She said: “It’s my hometown; my whole family are coming. I think it is going to be unbelievable – I’m so looking forward to it!”

High stakes, enormous pressure, and big expectations… the GCL team competition is set to reach fever pitch as the battle for supremacy rockets to its conclusion in New York.

Throughout the year the GCL team competition has seen more drama, tactics, and excitement than ever before, with all 16 teams experiencing a rollercoaster of emotions this season.

Currently leading are the St. Tropez Pirates with a score of 304 points, closely followed by the Shanghai Swans on 302 so far. Just six points behind at 296 are the former leaders and 2018 Champions London Knights, while Madrid in Motion are a further six points away with 290 overall.

As well as the Championship title, teams are fighting for a place in the GC Prague Playoffs GCL Super Cup, with the top four ranked teams fast-tracking to the semi-finals – a huge advantage in the fight for the 3 million euro prize pot and chance to etch their names into the history books.

The Longines Global Champions Tour Finals in New York are set to be an unmissable showdown with only one point separating the season’s top two riders, Pieter Devos (BEL) and Ben Maher (GBR), in the Championship.

The fight for the LGCT crown is on a knife edge in one of the closest duels in the history of the LGCT. In a dramatic shake-up last weekend, Devos took over the ranking lead after finishing second in the LGCT Grand Prix of Ramatuelle/Saint-Tropez, putting him on 278 points, just one point ahead of Maher on 277.

Both riders have been volleying for the lead, leapfrogging each other to take over the top spot in the ranking at different points throughout the season.

However, with only nine scores counting in each rider’s tally, Maher is in a slightly stronger position heading into the Finals in New York despite being second currently in the ranking.