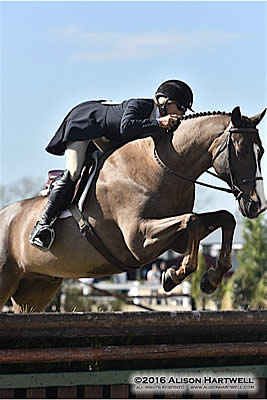 Holly Shepherd of Grand Bay, Alabama established herself as the Derby Queen when she pulled a hat trick Friday morning, taking the top three placings in the $10,000 USHJA International Hunter Derby on a course designed by Nancy Wallis of Lambertville, New Jersey.

Isabelle Potts’ Fusagers Carma, ridden by Jordan Gilchrist of Flower Mound, Texas, had an eighth place finish in the first round with a score of 156 but their Handy round’s score of 187 and combined 343 moved the pair up to a fifth place finish overall.

Maddrix and Specialty sat in the third place position after the first round, but after posting a second round score of 174.5, would find themselves moving into sixth place overall.

Big Numbers in the $5 Pre-Green Division

The Pre-Green Division led off the big hunter numbers for the week in the 3′ section and 3’3″ division. Jacqueline Roberts-McQueen and Holly Calantoni Houser’s Quadrolino led the 3′ Pre-Greens, while Leopold, owned by Grace Gambel and ridden by Livia Steffee, and Amy Ilson Ochoa and Angela Brown’s Turbo alternated first and second place positions in the 3’3″ Pre-Green Division. “We are really excited that riders and owners are earning valuable mileage for their young horses in the $5 Pre-Green Division,” commented Janet McCarroll, Gulf Coast Classic Show Coordinator. “People couldn’t believe that we were offering this division for only $5.00, but by the looks of the entries, I think word has now spread,” she added. “We couldn’t be happier that horsemen are taking advantage of this special offering,” she said.