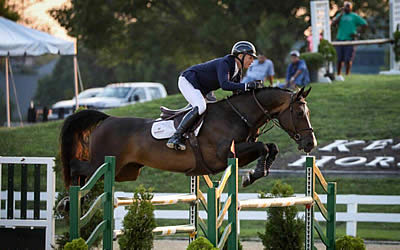 Sharn Wordley and Any.

Lexington, Ky. – July 27, 2019 – The feature event of the Kentucky Summer Horse Show, the $50,000 Rood & Riddle Grand Prix, was held Saturday evening in the Rolex Stadium with an enthusiastic crowd excited to cheer on the field of competitors during the Kentucky Horse Park’s annual Hats Off Day. Designed by Brazil’s Marina Azeveo, the 16-effort 1.50m course asked many difficult questions including a triple combination and a triple-bar. Following a competitive eight-horse jump-off, it was New Zealand’s Sharn Wordley and Arnoud Dobber’s Any who returned to the ring to race to the top spot. Jimmy Torano and Glasgow De Muze came in a close second while Celso Ariani took third place aboard Ukulman De La Nutria.

Saturday at the Kentucky Summer Horse Show began with the naming of the Grand Amateur-Owner Hunter Champion presented by Visse Widdel in the Stonelea Ring. Following suit from the professional hunter divisions earlier in the week, two horse-and-rider combinations tied for the Grand Amateur-Owner Hunter Champion title. Anna Rossi on Cakebread and Vanessa Mazzoli on Oh Brother both earned a total of 42 points from the Amateur-Owner 3’3″ division to earn the coveted grand champion tricolor ribbon.