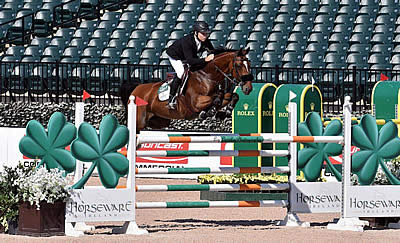 Mill Spring, NC – June 29, 2016 – Sharn Wordley (NZL) and Famoso D Ive Z, owned by the Sky Group & Sharn Wordley, kicked off the first day of competition at Tryon International Equestrian Center (TIEC) ringing in the start of the 2016 Tryon Summer Series with an impressive win in Wednesday’s $35,000 1.45m Horseware Ireland Opener CSI 3*. The pair clinched the win with a hasty time of 69.14 seconds, besting a talented field of 33 competitors.

Finishing in a close second place position was David O’Brien (IRL) aboard his mount O’Splendido with a time of 71.40 seconds, while Cantara 59, piloted by Sarah Segal (USA), produced another fast time clear round, crossing the timers in 71.05 seconds for third place.

Wordley and Famoso D Ive Z, a 2007 Belgian Warmblood gelding (For Pleasure x Chin Chin), have been partners for little over a year now, and have exhibited their talents in multiple FEI classes so far this season across the United States, as well as at TIEC. Wordley mentioned that Famoso D Ive Z is a spooky horse, yet he continues to deliver winning rounds and improve his technique.

“Famoso D Ive Z has won several opening classes, which is a little humorous because he is such a spooky horse. You would think he would get better as the week continues on, but he seems to be superior on the first day,” said Wordley.

He went on to speak of the challenging speed track set by Oscar Soberon (MEX), saying, “In the beginning of the course, it suited me to go quite fast. In the later part though, I had to go slower than some of the other competitors, but he jumped fantastic.”

Famoso D Ive Z excels in any type of class, which Wordley elaborated is a major component of his versatility and athleticism. The duo had amassed a string of consistent performances throughout the spring circuit and Wordley has fine-tuned what makes the gelding truly competitive in the ring.

“He has a massive stride and you can go really fast into big jumps and combinations,” he detailed. “I made up a lot of time between fences two and three because I could keep galloping down the long approach to the combination.”

“He is just an extremely fast horse. When he is clean, he is hard to beat. He is great to have on my team,” he elaborated. “Looking forward for the rest of the week, Famoso D Ive Z will compete in tomorrow’s FEI ranking class, and then my main mount, Casper, will also contest the ranking class tomorrow and the Grand Prix on Saturday night.”

Wordley is no stranger to TIEC, having solidified an impressive record at the facility throughout the spring season. Wordley and his team will remain in Mill Spring, NC for all four weeks of the summer series, as well as for the full duration of the 2016 Tryon Fall Series beginning in September. Wordley noted that he’s eager to stay at venue, especially after the quality finishes his string has produced in the major classes hosted so far this year.

“We love it here. It is fantastic. We like to support TIEC because the money is great and the competition is very respectable. We’ve continued to place well,” he added. “It’s also a very convenient location to our home base in Lexington, KY. It’s just an incredible spot.”

Competition will continue to heat up this week at TIEC, as competition on Thursday will showcase the $35,000 1.50m Suncast® Welcome CSI 3*, while Friday will host a $2,500 USHJA National Hunter Derby and a $10,000 Pre Green Hunter Classic. The inaugural Great Charity Challenge of the Carolinas (GCCC) is set for Friday, July 1, with gates opening at 5:00 p.m. and competition beginning at 7:00 p.m.

The popular “Saturday Night Lights” series will return for four consecutive weeks of weekend fun, beginning Saturday, July 2. Entertainment will start at 6:00 p.m. and the class is set to commence at 8:00 p.m. Following competition on Saturday evening, TIEC will host a one-of-a-kind laser light show in the George H. Morris Arena in celebration for the upcoming Fourth of July holiday. For more information and to see a full list of results, please visit www.tryon.com.