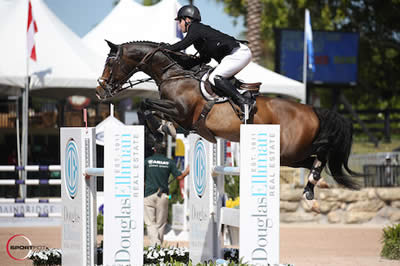 Alan Wade (IRL) is the course designer in the International Ring for WEF 9. Wade kicked off the week with 59 entries competing over his 1.45m speed track and 18 clear rounds. The fastest time belonged to Sweetnam aboard Spy Coast Farm LLC’s Cyklon 1083 in 59.25 seconds.

Cyklon 1083 is a 15-year-old Swedish Warmblood stallion (Cardento x Cortus) that Sweetnam has had immense success with over the last four years. The stallion continues to show his talent with top finishes throughout the WEF circuit.

“He has felt great. I have just been rotating him over the weeks,” Sweetnam said of Cyklon. “I think this is his ninth ranking class of the winter, and it is the ninth time he has been placed, so he is having a great circuit and he feels great. Even though he is 15 now, he still feels as good as ever.”

Speaking of his winning round, Sweetnam detailed, “Alan did a great job. There was an option at fence three, which was a big vertical, 1.55m probably. A lot of people went for the other vertical, but Cyklon is very careful and so I turned back tight to that, and he was very good there. Then the rest, I just had a plan and I stuck to all of my numbers for him. I did what I thought would suit him, and if that was fast enough, then that was fast enough, and if it was not, he would have been there or about. I am glad it worked out because Conor was just after me, and he has a bigger stride, and he left out in different places. Lucky enough, he did not catch me.”

Sweetnam spoke further of course designer Alan Wade, stating, “Alan is a world-class course designer. He builds everywhere. He has a great feel for the job, and he is one of the best out there, so it is great to have him here. He tries to be very smart about his courses. He never wants to kill anyone in a class, but he definitely catches people in different areas, which is quite clever course building sometimes. That is a sign of a good course designer, when everyone at the end of the day is happy, and he also gets the amount of clears he wants. He is very good that way.”

Cyklon 1083 has been a successful breeding stallion for many years, and Sweetnam now has the opportunity to ride one of his progeny, Cobolt, a ten-year-old Swedish Warmblood gelding (Cyklon 1083 x Camaro M). Sweetnam purchased Cobolt in partnership with several owners that make up the Blue Buckle Group and has been showing the horse lightly throughout the WEF circuit as they get to know each other.

“Cobolt is an exciting ten-year-old,” Sweetnam stated. “I bought him in Sweden this year, and Cyklon is his dad. They are quite similar actually. He is still a little green, but he is going to be a good horse.”

Also competing in the International Ring on Wednesday, the $6,000 1.40m speed, sponsored by Illustrated Properties, was held in a California split with a win for Laura Chapot (USA) aboard Mary Chapot’s Shooting Star in Section A, and Julie Welles (USA) riding Poden Farms’ Double Quick in Section B.

The ninth week of competition at the 2016 Winter Equestrian Festival continues on Thursday with the $130,000 Ruby et Violette WEF Challenge Cup Round 9 featured in the International Ring. The Pre-Green Hunter Three- and Four-Year-Old division will award championship honors in Ring 6. For more information and full results, please visit www.pbiec.com.