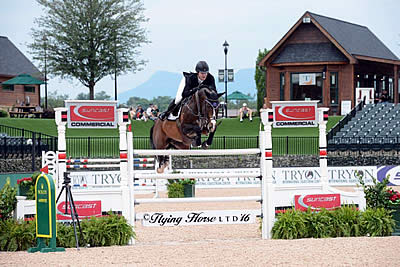 Tryon Spring 7 continues at TIEC throughout the week featuring FEI CSI 3* competition and will highlight the $130,000 Ariat® Grand Prix CSI 3* on Saturday, June 4, with gates opening to the public at 6:00 p.m. and competition beginning at 8:00 p.m. General admission and parking are free.

“I thought Michel did a good job. It was stout enough and I don’t think that it was overly technical, but it was big enough,” said Sweetnam. “He’s a great course designer and I think he had the right number of clears with 12 in the jump-off and in the ribbons.”

Cyklon 1083, owned by Spy Coast Farm, LLC, is an experienced mount for Sweetnam and has accumulated a number of top placings this year, including eight top five finishes in FEI competition throughout the winter circuit in Wellington, FL. The 2001 Swedish Warmblood stallion (Cardento x Cassandra) has spent ample time in many of the world’s biggest classes with Sweetnam in the irons and that experience is easily noted when the pair enter the ring.

“I thought my horse jumped very well in the first round and he’s fifteen so he has enough experience,” he stated. “Every Classic that I do with him I hope that I have a chance at winning it. He’s been having a great year and has had plenty of results. I feel like if I get into the jump-off with him I always have a chance.”

Sweetnam has established a working relationship with Cyklon 1083 that allows him to understand when to push for more, but also where it is safer to add, which was evident in the duo’s jump-off round. The pair opted to take several inside turns and Sweetnam felt it differentiated their time enough for the win.

He explained, “In the jump-off today I think a lot of people did five strides from fence two to three and I did six. I just felt for him, that I turned tightly back to two and three, so I think that’s where I made that time. Doing five in that line wouldn’t have been the ideal plan for him because he’s a little horse.”

Vanderveen set a strong pace aboard Bull Run’s Testify early in the jump-off, which seemed too good to beat until Sweetnam and Cyklon 1083 dashed through the timers just five-tenths of a second faster. Sweetnam is gearing up for a big week ahead, as he will have three horses entered in the Tryon Spring 8 FEI CSI 5*.

“I’m going to jump him in the class this Saturday night and hopefully we can have the same type of result. Next week is obviously a very big week and he’ll go again. I’ll have Chaqui Z and Buckle Up entered as well. Between the three of them I’m hoping that we can get some good results. There’s plenty of money and during the 5* week Thursday and Saturday will be very big for everyone.”

Competition at TIEC continues tomorrow featuring a $25,000 Under 25 Grand Prix and a $10,000 USHJA National Hunter Derby. The Tryon Spring 7 “Saturday Night Lights” event will welcome the $130,000 Ariat® Grand Prix CSI 3* with gates opening to the public at 6:00 p.m. and the first horse on course set for 8:00 p.m. For more information on TIEC and to see a full list of weekly results, please visit www.tryon.com.