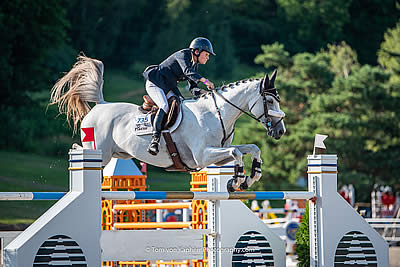 Bromont, August 1, 2019 – American rider Leslie Howard and Donna Speciale continue on their momentum with a second victory in the FEI (Fédération Équestre Internationale) sanctioned events at the International Bromont held at the Bromont Olympic Equestrian Park until August 4, 2019.

A commanding course
The course designed by Michel Vaillancourt (CAN) comprised 12 obstacles for 15 efforts in the first round and the technical difficulties beat most of the athletes. The really tight turn between the first and second obstacle, the double combination and the second to last obstacle pushed rides and their mounts to fault. In fact, the tight square turn between the first and second obstacle presented a difficult approach, while the double combination, emphasizing the second part of the gymnastic, caused a lot of faults at the first effort. Finally, obstacle 11, with its back to the crowd, brought the horses to an angle, making it easier to make the bar drop. Only 10 pairs made it to the jump-off, including Canadians Amy & Jonathon Millar, respectively riding Truman and Bonzay, Hyde Moffat (CAN) and Gisborne VDL, Quebecker Alexanne Thibault with Chacco Prime, Irishman Daniel Coyle with Cita, as well as Americans Jonathan McCrea and Fantasy BB, Christine McCrea with Jarcobond Van Den Oude Eik and Dali de Vy, and Leslie Howard & Donna Speciale.

Simply masterful
The first pairs back on the course for the second round, Alexanne Thibault/Chacco Prime & Frank Hendriks/Dio, both got penalties over obstacles. Irishman Daniel Coyle, who follows in the ring with Cita, throws caution to the wind: the pair starts with a fast rhythm allowing them to execute a clear round and establishes the time to beat at 34.78 seconds. The following 7 pairs had a leader to beat. Neither Christine McCrea with her two horses, Jonathon Millar/Bonzay, or Hyde Moffat/Gisborne VDL succeed to get clear rounds. As for Jonathan McCrea/Fantasy BB & Amy Millar/Truman, their perfect rounds are not enough to take first place, as Coyle & Cita still have the best time.

That is when Leslie Howard & Donna Speciale, who have been in the top 4 of all international events last week, come in the ring. Leslie Howard, who is not afraid of anything, pushed her mare to give her best: stride after stride, taking all possible shortcuts, the pair gain ground. They only have one goal in mind: get the best time and execute a clear round to finish first. With close to a lead of one second over Daniel Coyle & Cita, Leslie Howard & Donna Speciale sign their second victory at the International Bromont.

For more information, visit the web site at: www.internationalbromont.com.