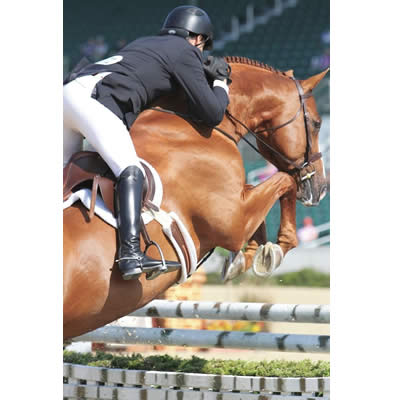 The similarities for this year’s top three finishers don’t stop there. While it was Dedication, not Garfield, whom Stewart rode to the top of the leader board in last year’s round, Boyd and Alfano’s top three finishes today came aboard the same mounts as last year – veteran derby competitor Brunello for Boyd and last year’s USHJA International Hunter Derby Champion Jersey Boy for Alfano.

Again for the second year in a row, the point differentials between the three riders were also strikingly similar – Stewart marginally out ahead and Boyd and Alfano neck-and-neck in the second and third positions. Stewart and Garfield jumped to the top of the list with scores from the three judging panels of 90, 92 and 92 plus four high option points added to each score for a 286 total. Boyd and Brunello, owned by Janet Peterson, finished their round with scores of 88, 90 and 86 for a 276 total including all four high options. Alfano was close on her heels with scores of 88.5, 87 and 87.5 plus the four high options for a 275 total.

“We like to really be close; we’re good friends,” Boyd joked about her and Alfano’s scores. “We like to keep it one point apart. Last year was only a quarter. This year we’re stretching it out. And then Scott’s 10 ahead of us. He is in his own league over there!”

From a field of 88 contenders, Boyd and Brunello were the first of the three top finishers to compete over the Steve Stephens designed course in the Rolex Stadium at the Kentucky Horse Park. The course featured fences meant to appear similar to what a horse and rider may encounter on a hunt field, including an airy, white plank fence, a large brush jump and another large brush and timber fence. The high option fences were also included throughout the course, presenting riders with the opportunity to earn additional points by jumping any or all of the four slightly higher obstacles.

Boyd elected to take all four of those high options, and she did so seamlessly and with ample room to spare as she and Brunello soared over the final fence in front of the in-gate. Their efforts earned them the 276 first round score and shot them to an early lead in the class.

“Brunello feels great and better than ever,” Boyd said. “You needed some scope out there and a super careful horse. Steve Stephens would do a big oxer and a careful vertical and then another big oxer. He led you into getting a little sloppy, and I think you saw some rails and rubs.”

While that was definitely the case, there were no rails or rubs for Stewart and Garfield as they maneuvered the course midway through the order of go to earn their score of 286.

Following last year’s USHJA International Hunter Derby Championships, Stewart had tentatively stated his retirement from the derby ring, but after his success in years past he was persuaded to return again this year.

“They twisted my arm,” Stewart said. “They asked me if I wanted to do it, and I wasn’t sure at that point. But we entered the horses, and I got to stay home and practice for two weeks so I felt comfortable enough to do it. I felt good last week and thought we’d give it a go.”

Stewart continued: “I haven’t ridden Garfield since the Alltech National Horse Show [in October], and he’s been doing the Junior Hunters. He was the best he’s ever been today. He was so relaxed. I didn’t really have to do anything. He likes me to just ride him once in a while. I think he was super.”

A dozen entries after Stewart and Garfield’s round, it was the defending champions Alfano and Jersey Boy’s turn to tackle the 13 obstacle course, and they proved that they are well within in the running for the top title again this year with their overall 275 score.

“I thought Jersey Boy was great,” Alfano said. “He made me a little nervous when I trotted in. He was pretty spooky. He sort of trotted toward the third jump and acted like he might want to spin around and go the other direction, which he can do. So I was maybe not all that confident heading to the first jump, but once he got going, he was really great.”

Alfano continued: “I was thrilled with him. He’s had a lot of time off this year, and I wasn’t really sure he was ready fitness-wise and strength-wise, but I was really happy with him.”

Alfano, Boyd and Stewart will be lead the rankings as the top 30 riders return tomorrow night for the Tier I Handy Hunter Round and the crowning of this year’s USHJA International Hunter Derby Champion.

For more information on the Bluegrass Festival Horse Show and all of the Kentucky Summer Horse Shows, visit www.kentuckyhorseshows.com.