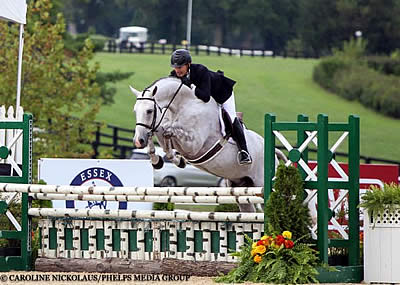 Lexington, Ky. – August 18, 2016 – Scott Stewart’s name is synonymous with winning hunters, and Thursday at the Bluegrass Festival Horse Show was no different. Stewart had a total of seven entries that qualified for the final round in the USHJA Pre-Green Incentive Championship, but it was Rivers Edge’s Storm Watch, who was in the lead after Wednesday’s second round with 520.5 points, who took home the prize. For the top thirty horse and rider combinations, it was an even playing field going into the championship round, as everyone had a clean slate.

Stewart and Storm Watch were the second pair to compete in the 3’3″ section, but as soon as the 6-year-old Oldenburg landed from the final fence, it was obvious that the pair had impressed the judges as well as the crowd outside the Kentucky Horse Park’s Walnut Arena. The three judging panels awarded them with scores of 91, 88, and 85.5 for a grand total of 264.5 points.

Thursday’s stellar performance by Storm Watch proved that Stewart had made the right decision to make time to try him out during his vacation in Holland.

“I bought him off a video. Randy Hendri sent me a video and I couldn’t go over to look at him, so it was almost two months before I got to go and the horse was still there,” Stewart said. “He was in Holland, and the week after the National Horse Show, we went over. We didn’t go over specifically to look at horses, but he was sort of in the area so we looked. It was supposed to be a vacation, but it was on the route.”

Stewart has recently returned to the show ring after time off from a pinched nerve in his neck. During his time recovering, Ken Berkeley took the reins for Stewart to prepare the horses before coming to Kentucky.

“Ken has been riding him at home, so he really got the horse ready for here,” Stewart said. “I wasn’t able to ride for a month or so, right after Devon. I got through the last day of Devon and this is my first show back. I rode at home last week, then came to Pony Finals. I went to some very good doctors in New York and they said I just needed physical therapy.”

Stewart said that Storm Watch’s way of going is slightly different than what he prefers, but the gray gelding is improving every day.

“He’s pretty laid back and quiet. He’s naturally a good jumper, but his balance is a little low.” Stewart continued, “He doesn’t pull, but it’s a little of a different ride for me. I don’t really like them that low, but he’s getting better and better.”

In addition to the tricolor ribbon, wool cooler, and generous prize money, Stewart was awarded a free lease for one year on a Sundowner Charter SE two-horse trailer.

Coming in second place was Lisa Hankin’s Hanoverian, Puissance R, ridden to victory by California’s Jenny Karazissis. The duo won the first round of the USHJA Pre-Green Incentive Championship on Tuesday, and Thursday’s efforts in the 3’3″ section proved that the mare is ready to show at the Capital Challenge Horse Show in October. Judges awarded them scores of 88, 89, and 87 for a total of 264 points.

“This is my first time doing the USHJA Pre-Green Incentive Championship. I’m so excited to be here. We were going to choose between here and Capital Challenge,” Karazissis explained. I said, ‘She can come here and if she does well, she could do both.’ So I’m really glad that we made the trip and it was so worthwhile.”

In third place overall was Hunt Tosh and Douglas Wheeler’s Chicago, who campaigned in the 3’3″ section. Tosh led the 8-year-old gelding around the course to finish up with scores of 86, 84, and 92 for a total of 262 points.

All three hunter professionals agreed that the USHJA Pre-Green Incentive Championship was a step in the right direction for the hunter sport. It is a great way to showcase the younger horses and it features good prize money, which attracts the owners.

The next event for hunter fans during the Bluegrass Festival Horse Show is the 2016 USHJA International Hunter Derby Championship, which will take place over the course of two days. Some of the same hunter riders who went head-to-head Thursday will set their eyes on the prize for the derby championship, which starts on Friday at 8 a.m. in the Rolex stadium.

After coming close to winning the 1.40m Open Jumper class on Wednesday, Aaron Vale and Acolina R returned on Thursday, this time taking home the blue ribbon with their double-clear round during the Bluegrass Festival Horse Show.

Going near the middle of the order in the Rolex Stadium, Vale and Sarah Turner’s Acolina R tripped the timers in 36.069 seconds in the jump-off and unseated Kyle Timm and Georgie B from their leading time of 37.727 seconds.

“I tried out a different bridle today,” Vale explained. “Acolina is hard to find the right bridle for, so more than anything I was trying a new piece of equipment, and it seemed to suit her pretty well. She kind of likes to go. I caught the fences off the turns really well, so she just ended up being really fast today.”

Vale said he got the ride on the 11-year-old mare about a year and half ago. Together, the duo has had top placings in grand prix events at a number of horse shows, including the Great Lakes Equestrian Festival and Kentucky Horse Shows.

“She gets a little wound up,” Vale explained, laughing. “Her energy probably gets in the way more often than it helps us, but when things come up right and I can do the turns smoothly and keep that gallop, her forwardness is definitely good. Controlling her across a technical course can be difficult, though. You live by the sword; you die by the sword.”

However, Vale said the course rode perfectly for the mare, who was unfazed by the sand sculptures that dotted the ring.

“She wasn’t worried about the sand at all,” Vale said. “It’s nice having the decorations for the [USHJA International Hunter] Derby fences. It livens the ring up. It’s such a big ring, but with the decorations there was more ambiance out there. The courses themselves were really fun and balanced today, and I really liked the tracks. It was a pretty course for my eye.”

Earlier in the day, Sharn Wordley continued his successful week with a win in the 1.35m Open Jumper division aboard Didienne.

Wordley purchased the mare with Steve Tinti in Morocco about six months ago. After riding the 8-year-old for the past three weeks at home, this marks the duo’s first appearance together in the show ring.

“She’s a special horse,” Wordley said. “We kept her at our barn in Belgium for six months. My rider there did some shows with her there and got her trained up, because she hadn’t seen a whole lot yet when we got her. This is my first show on her, and she’s turned out to be a real pleasure of a horse; I really like her, and I’m excited about her future.”

Wordley said he plans to continue showing the mare in the 1.35m division, and will try her out in the 1.40m division next week.

“The 1.35m is probably enough for her now,” Wordley said. “She’s had a couple of months off, so from now on, we’ll just see where she’ll be comfortable. She’s improved so much in her rideability in the past three weeks that I’ve had her, so I’ll just see how quickly she wants to go, and she’ll tell me.”

The Bluegrass Festival Horse Show will resume on Friday with the beginning of the 2016 USHJA International Hunter Derby Championship, which will take place over the course of two days. Other highlight events include the $5,000 Hallway Feeds USHJA National Hunter Derby. Jumper highlights include the $25,000 Hagyard Lexington Classic, and the $40,000 Bluegrass Festival Grand Prix, sponsored by Audi of Lexington.