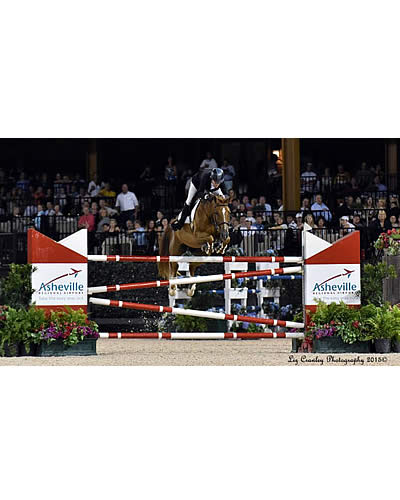 Mill Spring, NC – July 12, 2015 – A large crowd of spectators filled the stands to witness the $210,000 Asheville Regional Airport Grand Prix CSI 4* at Tryon International Equestrian Center (TIEC) on a beautiful summer evening in Mill Spring, NC. Schuyler Riley (USA) captured another big international win, adding back-to-back victories in the “Saturday Night Lights” Series aboard nine-year-old Dobra De Porceyo. The duo crossed the timers in 39.009 seconds as the first pair to test the track in the four-horse jump-off. Kimberly Prince (USA) and RMF Bella Baloubet finished in second with a time of 39.967 seconds and Scott Keach (AUS) riding Fedor, rounded out the top three, adding four faults and crossing through the finish in 38.475 seconds.

Riley and Dobra De Porceyo were the first clear round of the night, testing a technical track designed by Ana Catalina Cruz Harris (MEX), who has set a difficult week of courses for FEI riders at TIEC. Riley contested this week’s class coming off a win in the $127,000 Ariat® Grand Prix CSI 3* held last Saturday, July 4, aboard “Dobra”. The victory was Riley’s first grand prix win in almost three years.

“It almost feels like disbelief, but in a sense not really, because I know she can always do it. She’s such a great horse and is just amazing. Every time I walk a course, I come out of the ring knowing she can do it. I haven’t had that feeling in a very long time,” said Riley. “She’s such a pleasure to ride and it’s fun. She enjoys the sport and just gets it. She knows she’s supposed to jump and not hit them and go fast in the second round. It makes my job easy.”

The petite chestnut mare may not have the same size advantage as some of her fellow competitors, but has the heart and personality of a champion. Her unconventionally large stride and hunger for the spotlight have made her a true powerhouse in the ring in just her first season at the grand prix level.

“She absolutely loves the crowd. It really gets her blood up and I like it too. It makes it more exciting and feels like real sport,” remarked Riley. “That’s something that I think Mark [Bellissimo] has done an excellent job with, getting the stands filled at night. For a nine-year-old to be able to come to an atmosphere like this, under the lights, at night, with a huge crowd; she’ll never be able to gain that experience anywhere else in the U.S.”

Riley narrowed in on a plan of attack before heading into the George H. Morris Arena, knowing the course was difficult and the time allowed could be troublesome. “I thought it was tough and the time allowed seemed tight, but because Dobra is so fast, it’s not really a problem so I tried not to worry about it. I really enjoy riding her courses because they’re technical, but you can ride them. If you’re communicating well with your horse, you can make it happen.”

Riley and Dobra De Porceyo are coming into their own on the international stage, but at one point, Riley wasn’t sure that would be a possibility with the mare’s lack of trust in people and fiery demeanor.

“Before I bought her she was supposedly throwing people off and after I got her I completely understood why because she tried to get me off quite a few times. It took a while to earn her trust, but once I had it, I knew she would do anything for me,” she explained. “Everyone always talks about how I feed her treats in the ring and she’s very food motivated so it’s a great reward for her. She looks forward to that. She enjoys this sport and it’s easy for her to do this physically. Its playtime and that’s how I know that I’ve earned her trust.”

Not only did Riley pick up another grand prix win, but groom of seven years, Jesus Pimentel, was awarded with the new Groom’s Initiative Award for the second week in a row, earning another $500. Pimentel is never far from Dobra’s side and takes an incredible amount of pride in providing the mare with the absolute best care possible, according Riley.

“Jesus loves his horses more than anything. As soon as he started taking care of her she just came into her own. She feels really well loved and appreciated by him. She wants to work with you and he does an amazing job of fostering that,” she commented. “He doesn’t spoil them but he gives them all of the right attention. He’s meticulous with everything he does and I never have to worry about what he’s doing. We have an incredible working relationship. I completely trust him with her care.”

Pimentel beamed watching “Dobra” take her second victory lap in two weeks at TIEC and said he always knew the mare had the talent to win at the top.

“She did what she always does tonight. She was perfect and she always tries her best. It was a big highlight to see her be the first horse clear on course. I know she’s not afraid to go top ten in the order because she likes setting the pace,” said Pimentel. “We’re very close and I always make sure that I give her treats throughout the day because I know she enjoys it and always asks for them. The one thing she hates is dogs, including my dog Pirate, which can be very funny. She pins her ears at them and acts like a diva. She’s the princess of the barn and she knows it.

“I have a very special relationship with her and to win this award two weeks in a row is very meaningful to me because I put my heart and soul into caring for her. She’s saying thank you by winning these classes and I’m so proud of her,” he continued.