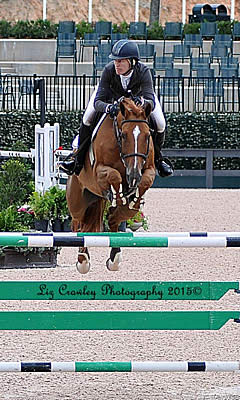 Mill Spring, NC – July 15, 2015 – Schuyler Riley (USA) and Dobra De Porceyo have dominated at Tryon International Equestrian Center (TIEC) over the past few weeks, picking up another win today on the first day of FEI competition at Tryon Summer 4, the final week of the Tryon Summer Series. Riley and Dobra De Porceyo added another win to their ongoing streak in the $34,000 1.50m FEI Classic with a time of 63.76 in the only FEI speed class of the week. Brian Walker (CAN) and Tamara 296 followed in second, finishing in 64.4 seconds with Sharn Wordley (NZL) and Casper rounded out the top three, crossing the timers in 69.71 seconds. The Tryon Summer Series continues through Sunday, July 19.

Riley and Dobra De Porceyo topped both the $127,000 Adequan® Grand Prix CSI 3* during Tryon Summer 2 and the $210,000 Asheville Regional Airport Grand Prix CSI 4* last week at Tryon Summer 3. The 2006 CDE mare (Action Breaker x Sanne) has made a statement at TIEC with her strong and consistent performances at the top level of the sport.

“She’s such a pleasure to ride and it makes it fun. She’s a really smart horse and always tries her hardest. She never gives less than 100%,” said Riley. “She’s a chestnut mare, so she has a little bit of attitude but at the end of the day she really wants to work with you.”

The class of seventeen entries tested Manuel Esparza’s (MEX) course, familiarizing their horses with the George H. Morris Arena before the coming week of competition. Riley planned to give Dobra an educational and easy ride in the first class of the week, but the mare perked up throughout the round and secured her third win in three weeks at the venue.

Riley and Dobra De Porceyo have competed in just over 20 FEI competitions together and the pair has steadily improved their finishes over the past year. As the mare’s confidence and talent continues to grow, Riley believes that she will be ready to tackle some of the biggest tracks in the world within the coming year.

“Her stride is enormous for such a small petite horse. I know that I can leave out a lot because she always manages to get there easily when I ask her,” she commented. “Our plan was to really go over her after last week and see how she was feeling. We jumped her today so that she would have more time to recover before Saturday,” she explained. “She tells me every day. She’s very clear with what she wants and how she feels.”

The track saw four combinations go clear, but Riley and Dobra stopped the timers a second faster than Walker and Tamara 296, who went late in the order but couldn’t catch the leading duo’s time. Esparza will continue to design the courses in the George H. Morris Arena for the rest of the week and Riley is looking forward to the final week of FEI competition at TIEC and perhaps collecting her third grand prix win with Dobra this weekend in the $127,000 Grand Prix CSI 3* beginning at 8pm on Saturday, July 18. Gates will open to the public at 6pm.