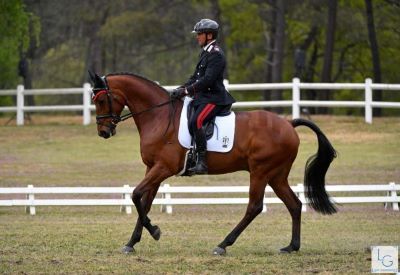 First of the three events of the CCI 4 * -L Equi Action of the Saumur Complet, the dressage welcomed the first twenty-one competitors. With the score of 70.87% (29.1 penalties), the Italian Stefano Brecciaroli on Bolivar Gio Granno takes the lead of the (very) provisional classification. He is ahead of the Dutch Raf Kooremans on Dimitri N.O.P. (70.08%; 29.9 penalties) and the squire of the Cadre Noir de Saumur, Arnaud Boiteau (68.89%; 31.1 penalties) on Quoriano IFCE.

On Friday, the second half of the participants will take their turn for the dressage. In particular, some important stars for the French clan are expected, including Nicolas Touzaint and Eboli at 12:22, Karim Laghouag and Triton Fontaine at 12:47, Gwendolen Fer and Romantic Love at 13:17, or even Nicolas Astier and Babylon de Gamma at 13:25. Live broadcast on SC Sport (www.saumur.org).

A word from Stefano Brecciaroli (ITA):

“This first day of dressage was very good for Bolivar and me. Bolivar was very attentive in the arena, despite his young age (10 years). He answered everything I asked of him perfectly, while he could have been over-awed by this impressive arena… Horses can be nervous, can heat up due to the surroundings, but Bolivar was comfortable. This is the second CCI 4*-L he’s competing in here at Saumur Complet. For his first CCI 4*-L, last October at Montelibretti, he took fifth place; unfortunately, our momentum was lost due to the cancellation of many dates and the participation of the CCI 4*-L Equi Action of Saumur Complet will enlighten us to the confirmed potential of Bolivar.”