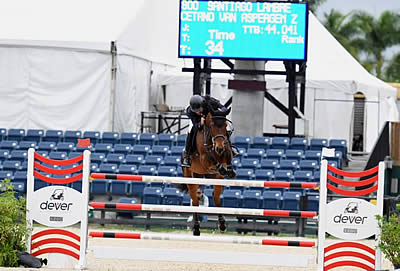 Wellington, FL – December 23, 2019 – Santiago Lambre of Mexico continued his winning streak this Sunday during the ESP Holiday III show, this time claiming the blue ribbon aboard Cetano Van Aspergem Z in the $25,000 Semican National Grand Prix. With the fastest time of 42.063 seconds and no faults in the jump-off, Lambre beat Canadian Ian Millar and Future Adventures’ Christiano, after the pair completed the jump-off time of 44.041 seconds to claim second place. Lambre returned for the yellow ribbon aboard his entry, Diathago, after their 45.707-second jump-off.

Out of the 25 trips that entered the course designed by Jasen Shelly, only eight competitors returned to contest the second round, and the top three were the only horse-and-rider combinations to put in a double-clear performance. “In the first round, I think the line at the beginning gave a lot of people trouble,” commented Lambre. “It was in between seven or eight strides, so if you weren’t on the distance you could’ve had some trouble. Then when a triple combination at the end of the course is always difficult too.”

Cetano Van Aspergem Z is one of Lambre’s own horses, with which he has a very successful track record: “I’m very happy with how he went. He’s not green, usually competes at the five-star level, but I’m still working to get him fit for season. So the track for him the track was a bit easier for him and he’s very fast.” When asked about holiday plans, Lambre mentioned that he’ll just take three days off before they’re all back work and competing at ESP’s New Year’s Show on December 27.