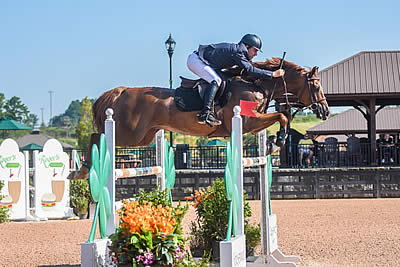 Dean Rheinheimer’s course tested 27 entries in the initial round, with eight horse-and-rider pairs welcomed back to challenge the jump-off track. Last to go, Lambre and the 2010 Oldenburg gelding (Conthargos x Balou Du Rouet) owned by Salvador Onate Barron made easy work of the course despite being newly paired teammates.

“This is the second show I’ve had with him [Con Rouet],” explained Lambre. “He’s a new horse to me, and looks very competitive. I think he’s going to be a winner! I showed him in Michigan one week, and this is the second show. He’s very easy to ride, and careful. I got him three weeks ago from Mexico.”

Lambre and Con Rouet were fourth in Friday’s $5,000 Horseware Ireland Welcome Stake, just missing out on the podium, but found their stride in Sunday’s jump-off course, Lambre detailed. “I thought it was a really nice course. Not too big, but difficult lines, so it was not easy for the riders. The jump-off was really nice,” he continued. “You could turn short and get a nice gallop. It was very nice!”

Competition was stiff, as fellow competitor Land has been on a hot streak at TIEC and had posted a tight time to beat, but Lambre utilized his position in the order of go to study where he could make up the time: “I was the last to go, so I saw the other riders. I had to do everything very short and forward, because it was really fast!”

Course designer Dean Rheinheimer (Sheridan, IN) had 26 pairs attempt his first-round track, with nine entries earning a chance to compete over the jump-off course. Continuing her recent trend of three-for-three, Land piloted all three of her mounts through to the second round of competition, ultimately bookending the podium. “The course rode really well. There was a lot to do, so it was fun!” Land said of the course.

“He [Falco V] has just been amazing. He’s such a winner, and he always tries his heart out. He was so speedy today!” she said of the 2010 Dutch Warmblood gelding (Bustique x Montreux) owned by Pinetree Farms Inc. “Falco is nine, and I’ve had him almost three years.”

Land has an impressive trio of horses that have truly hit their stride at TIEC recently and continue to collect consecutive podium placings. Land explained: “We rode complicated courses this summer at Spruce Meadows, and I think that really helped me make some strides this summer. All of the horses are just in a really good place with their age and mentality: Falco is nine, Liroy [30] is ten, and Grumbles [Get Go] is seven, and they’re all just in a really good place. They feel like they’re thriving!”

Get Go in particular has stepped up in the last few weeks, Land shared, competing in his first “Saturday Night Lights” Grand Prix in Tryon Stadium and taking first, despite “just starting to jump at this level,” Land revealed. “He’s just been amazing. This [Ring 4] was a new ring for him, and I am so proud of him! This is for sure the biggest he’s jumped in a smaller ring, so it was really nice to feel him jumping so well. I was a little bit more conservative on him in the jump-off because it was his first time jumping bigger in a smaller place, but he was amazing.”

Land hopes to keep her winning streak alive and will compete at the venue for the duration of the Tryon August Series, giving credit to “Team Land” for her consistent results: “I credit my recent success to having an amazing team, both at home and on the road, including my parents, Jay and Kim, my grooms and rider. They are all incredible and make my job so much easier!”