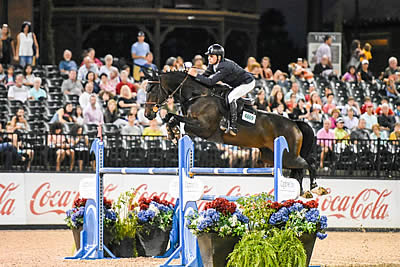 “Diathago is a new horse I’ve had now for two months. I jumped him three weeks ago in the 5* Grand Prix in Saugerties, which we won. We were one of only two pairs clear; it was a really tough course,” Lambre said. “Now I’m preparing him for the 5* here in three weeks.”

The course, designed by Nick Granat (Chicago, IL), challenged 29 pairs, with eight returning to pilot the short course. “It was a really nice course for a National Standard Grand Prix,” Lambre shared. “I think it was tough enough, but didn’t have terrible results.

“I wanted to jump under the lights with him [Diathago] since he’s never done that before, but he wasn’t spooky at all,” Lambre, who has big hopes for the 2009 Oldenburg gelding (Diarado x Carthago) owned by Gestut Lewitz, revealed. “The plan is next year to do the Nations Cup in Wellington and I also think this horse has the potential for the Olympics.”