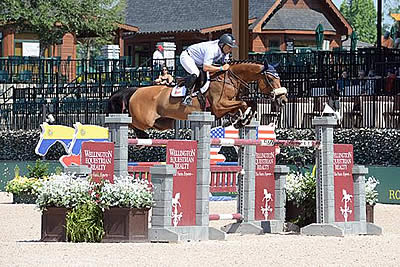 Mill Spring, NC – June 12, 2016 – On the final day of FEI CSI 5* classes at the Tryon International Equestrian Center (TIEC), Samuel Parot (CHI) took home the blue ribbon in the $86,000 1.50m Suncast® Challenge on his mount Couscous Van Orti. The speedy duo edged the competition with a time of 35.128 seconds. Parot was one of two combinations to jump double clear around the challenging course designed by Alan Wade (IRL). Karl Cook (USA) piloted his ride Caillou 24 to a faultless round and a time of 36.822 seconds, earning them second place. Coming in third to round out top three was Scott Keach (AUS) and Fedor with a time of 37.490 seconds.

The class brought an exciting jump-off round featuring six horse and rider combinations and had spectators cheering for Parot, as he dashed through the course and made a big move to the last oxer. Alan Wade delivered another solid course, building two tracks that aimed to test speed and agility. Parot commented on the course, “Alan Wade is really strong course designer and each of his courses is tough, yet fair. In the jump-off I kept seeing good distances. I honestly got a little lucky, and I won. A little luck is always necessary.”

“Both of my horses jumped well this week and I’m pleased with their performances,” he added.

Couscous Van Orti, a 2002 Belgian Warmblood gelding (Nabab de Reve x Cash), and Parot have been a team for a little over a year, competing in multiple FEI CSI 4* and FEI CSI 5* competitions. Parot spoke about the facility, which is growing to be a favorite stop for his team, saying, “Everything here is amazing. It is new, the footing is pristine, and the people are great. Also, the attention to the riders is unlike another show I’ve been too.”

On the final day of TIEC’s first ever FEI CSI 5* week, Parot touched on the importance of the entire competition, as he successfully guided two horses to top finishes, stating, “I cannot say enough good things about Tryon. It is comfortable for the riders and the horses. I hope more and more people will begin to come here because it is an unbelievable place.”

With this thrilling win now under his belt, Parot feels confident for the future success of Couscous Van Orti, Atlantis and the rest of his team as they begin a short break in competition before heading back to North Carolina for the four weeks of the Tryon Summer Series.

“Next we will head to Chile, my home country, for two weeks and then we will back to Tryon in July for the FEI CSI 3* and FEI CSI 4* competitions in the summer series,” he explained. “My plan for the fall is to head north to compete in Calgary at Spruce Meadows and then maybe the L.A. Masters in California. Wellington, FL will be our winter pit stop, before returning to this remarkable facility in the spring in 2017.”

“Normally every year after the winter season in Wellington, I head to Europe. However, last spring I came here to the Tryon International Equestrian Center (TIEC) and I was blown away. There is no need to go to Europe when America has immaculate shows such as these. We will absolutely be back,” Parot added.

Competition draws to a close at TIEC, concluding the 2016 Spring Series, which could not have been more successful, showcasing the talents of equestrians from around the country and the world. The first two weeks of the 2016 Tryon Summer Series, will begin on Wednesday, June 29, and entail back-to-back FEI CSI 3* weeks and AA Premier hunter divisions. The Tryon Summer Series will host four consecutive weeks of the popular “Saturday Night Lights” Series with two consecutive $130,000 Grand Prix CSI 3* classes up for grabs, followed by two $216,000 CSI 4* classes. The inaugural Great Charity Challenge of the Carolinas (GCCC) is set for Friday, July 1. If interested in participating as a rider or becoming a team or event sponsor, please contact gcc@tryon.com. For more information on Tryon International Equestrian Center please visit www.tryon.com.