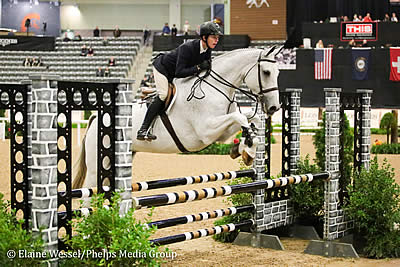 Lexington, Ky. – Nov. 4, 2018 – Celebrating its 135th year, the National Horse Show has come to be known as one of America’s premier indoor equestrian events thanks to its rich history and classical traditions, with the ASPCA Maclay National Championship, presented by Chansonette Farm, adding even more prestige as one of the four major equitation finals held each fall season. Since 1933, an elite junior rider’s name has been etched into history as the annual champion, and this year the competition tested 175 horses and riders over a series of challenging phases to determine the deserving victor. The culmination of a week at the Kentucky Horse Park, the 2018 National Horse Show concluded with a dream realized for Sam Walker of Ontario, Canada, now the newest champion of the ASPCA Maclay National Championship and winner of the esteemed ASPCA Horsemanship Trophy.

Over the course of the day, the initial field of participants took turns tackling Bobby Murphy’s (USA) expertly designed equitation track, which looked deceptively straightforward at first glance. Incorporating most jumps as part of lines, the efficient course offered competitors multiple opportunities to either spotlight their talents or fall victim to the design’s tests, with distances between fences varying and requiring riders to lengthen or collect quickly within the same series of obstacles. Structurally, the fences presented a different type of challenge, with Murphy’s creative collection of jumps including plenty without standards in addition to a handful of skinny jumps, a gate, and an airy triple bar. As the 39th in the order-of-go, Walker and North Run’s Waldo exemplified the pinnacle of equitation, completing a flawless trip to jump into the first standby list.

Separated from the rest of the pack as the creme of the crop, 25 partnerships were hand-selected by the judges’ booth, which was occupied by esteemed horsemen Walter T. Kees and Chance Arakelian, to return for the second phase of the contest after top-notch performances over fences. Headed into the under saddle and second over fences portions of riding, Walker, Brian Moggre, Ava Ellis, Emma Kurtz, Catalina Peralta, Paige Matthies, Daisy Farish, and Coco Fath were pegged as the frontrunners, all riding head-to-head in the same flat section.

During the under saddle phase, horse-and-rider combinations’ adjustability, balance and connection were put to the test by the judges, who asked for a series of skill demonstrations such as the counter-canter, extended canter, and sitting trot, among others. With one final chance to prove their abilities, the top contenders returned to the Alltech Arena for a second trip over Murphy’s track, this time consisting of almost no fences with standards, a hand gallop, a counter-canter, a trot fence, and an airy fence jumped in both directions.

Returning in reverse order of the standings for the second over fences phase, Moggre had the advantage as the last entry to ride, with Walker, Farish, Fath, Kurtz, Matthies, Ellis, and Alexandra Worthington sitting in second through eighth positions, respectively, and all aiming to knock him from the top of the leaderboard. Following the completion of the top 25, the judges needed one last look at the top six, and asked for testing from Walker, Moggre, Fath, Kurtz, Matthies, and Mimi Gochman, who leapfrogged from 12th place into the work-off. Of the remaining contenders, Moggre was the only one to have been victorious in a national equitation final previously, having won the Dover Saddlery/USEF Hunter Seat Medal Final at the Pennsylvania National Horse Show earlier this fall, but it was Walker who had moved to the top of the standings headed into the last display of riding. Sunday afternoon’s test asked riders to canter fence 7, canter fence 2, counter-canter fence 6a, canter fence 6b, canter fence 4, halt, and return to the line.

As the last to ride in the work-off, Walker capped off the day’s championship with an exclamation point, navigating a textbook trip aboard Waldo seemingly with ease and displaying high levels of precision, correct form, and aid effectiveness to secure the championship tricolor and the prestigious honor of ASPCA Maclay National Champion. As the 2018 victor, Walker’s name now joins the ranks of past winners that include some of the sport’s icons such as Bill Steinkraus, Frank Chapot, and George Morris, as well as recent superstars Lillie Keenan, Victoria Colvin, and Madison Goetzmann.

Sunday’s distinction for Walker is one of the highlights of his competitive equitation career, although he has come close to the top call more than once. This year alone, he has placed within the top 10 in the Dover Saddlery/USEF Hunter Seat Medal Final at the Pennsylvania National Horse Show as well as the Washington International Horse Show (WIHS) Equitation Final. A multi-talented equestrian, Walker also campaigns in the upper level jumpers, having won U25 and High Junior/Amateur-Owner Jumper classes across the United States and Canada under the tutelage of his trainers Missy Clark and John Brennan from North Run. For training the winning rider, Audi of Lexington donated a one-year lease of an Audi to Walker’s trainers.

The men represented well this year, with Moggre capturing the reserve honors behind his peer, Walker. Moggre rode Efendi, owned by Donald Stewart, over the course of the contest. Jacob Pope was the last male athlete to claim the top honors in 2012, and prior to that was Brian Walker in 2001. Coincidentally, Sam got paired with Waldo partly with the help of the previous winner that shares his namesake. Jumping from sixth place after the second over fences phase, Paige Matthies piloted Barbara Smith’s Blurred Lines to third overall thanks to her standout work-off test to round out the podium finishers.