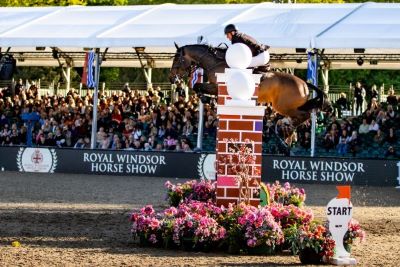 Royal Windsor Horse Show 2022 got off to a scintillating start with top-class national Show Jumping and Showing competitions and impressive international displays from The Musical Ride of the Household Cavalry Mounted Regiment and The Royal Cavalry of Oman.

The Puissance provided a fittingly spectacular finale to the opening day of the 2022 Show. Five riders made it through to the fifth and final round to face the 2.15m wall. As second to go in the final round, Derek Morton jumped the imposing wall clear aboard KBS High Quality to put the pressure on those to follow, who were now fighting for a share of the winner’s prize fund. Guy Williams, a joint winner of the class in 2021, cleared the wall itself but knocked the triple bar to finish on four faults. It was the last combination to go, Trevor Breen riding Chankar Mail, who had shown signs of greenness in the first round but grown with confidence throughout, who was able to match Morton’s feat, demonstrating all the power and agility required to conquer the daunting wall and share the spoils.

After the class, Breen said: “I’m just so happy with the horse. I haven’t had him too long, but he’s been really good and I’m over the moon with his attitude and bravery tonight.”

Morton added: “KBS High Quality has only done three Puissance before, but he has won twice at Bolesworth and then I gave him a run last weekend at Chard. With the Puissance, it is a leap of faith for both the horse and rider as you can’t see what’s on the other side! Tonight, he felt super – he is such an amazing horse!”

Earlier in the day, Sally Goding made an inspiring return from injury to capture the Land Rover National 1.40m Open Jumping Competition, a single-phase class where the second half of the track was against the clock. Coming forward towards the end of the 47-starter competition, Goding knew what was required to take the victory from Oliver Fletcher, who finished in eventual second having led from the midway point. Goding, riding the eight-year-old Spring Willow, produced a foot-perfect performance, shaving 0.04 seconds from Fletcher’s time, with Sophie Fawcett finishing in third.

Of the chestnut mare Spring Willow, Goding said: “She’s a homebred so it’s extra special for us. I actually just came back from a broken ankle ten-and-a-half weeks ago so I’m not meant to be riding, but she’s the bravest horse in the world and there’s no other horse I would rather be riding, so I couldn’t miss coming here.”

Her Majesty The Queen started the 2022 Show in style with a two wins in the Showing. In the Coloured, Non-Native in Hand Horse section, her five-year-old skewbald gelding Sunbeam, led by Chris Hunnable, won his class but then had to settle for reserve in the Coloured in Hand Championship. The top spot went to Isle of Wight-based police officer, Megan Champney, with her piebald mare — also five — Penrock Perfect Puzzle. Her Majesty’s second victory came in the Flat Ridden Sport Horse, with Daydream III winning under the guidance of Katie Jerram-Hunnable.

Working Hunters occupied centre stage in the glorious Castle Arena and after two excellent classes, the top spot went to Alice Homer — granddaughter of legendary showman David Tatlow, himself a double champion here in the section some years ago. Reserve fell to the second-placed Heavyweight combination, Windsor debutantes Eleanor Hirst and Noble Gladiator.

The Amateur Ridden Hunter section was well-supported by competitors and spectators alike, and after two great classes the top spot went to Cheshire rider Camilla Stowell-Davies with her home-produced Lightweight winner, Glenteeran Dance in the Deep.