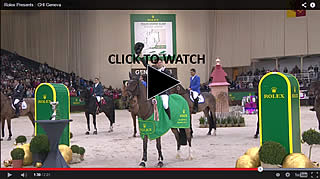 Geneva, Switzerland, 11-14 December 2014 – The mark of a truly global sport is that it never sleeps. As the international tennis circuit moves around the world and from outdoor to indoor tournaments, so does the demanding world of top-level Show Jumping.

It builds to an annual peak at CHI Geneva. The Swiss indoor show, situated in Rolex’s beautiful home city, is regularly voted by the sport’s greatest riders as the best in the world. All of them will strive to compete in Geneva from 11-14 December. It has a long and distinguished history, having regularly attracted the finest horses and riders since its inception in 1926, and its proximity to Christmas gives CHI Geneva a particularly special atmosphere.

The show’s highlight is always the Rolex Grand Prix, this year being staged on Sunday 14 December. Rolex has been a presenting partner of CHI Geneva since 1996, and the grandstands will be packed with excited, passionate spectators for this intensely competitive class.

The Rolex Grand Prix at CHI Geneva also forms the third stage of the thrilling Rolex Grand Slam of Show Jumping, giving the show the status of one of the sport’s three “Majors”.

This unique competition, established as Show Jumping’s ultimate challenge, travels the world from Aachen in Germany to Spruce Meadows in Canada before concluding in Geneva.

An added highlight of CHI Geneva 2014 is the return of the Rolex International Jumping Riders Club (IJRC) Top 10 Final. This is elite sport at its finest: just the Top 10 ranked riders of 2014 battling it out to be named number one in the world.

There will also be a CHI Geneva first in the form of an indoor Cross Country class presented by Rolex, with Peter Hasenböhler in charge of designing the course and extending the main arena to include the adjacent training paddock. Along with former World Champion Michael Jung, there will be a host of other notable international event riders taking part in this innovative competition.

In recent years, winners of the Rolex Grand Prix at CHI Geneva have often come from the superb group of equestrian athletes who form Rolex’s equestrian Testimonees.

Switzerland’s Steve Guerdat was last year’s winner on his 2012 Olympic gold medal winning horse Nino Des Buissonets and the pair have set their sights on a third triumph in Geneva.

“Geneva is at the very heart of our sport. You feel like a star when you go into the ring, this is the place where you want to leave the arena as a winner.”

In 2010, Kevin Staut took the Rolex Grand Prix for France on the great Silvana HDC, and two years earlier Canada’s Eric Lamaze won on the incomparable Hickstead, the horse he rode to win Olympic gold in 2008.

Three-time winner of the World Cup Final, Meredith Michaels-Beerbaum and Kent Farrington, the most recent addition to the Rolex family, will be looking to make their mark on the show. Meredith has competed many times in Geneva and her exciting new ride, Fibonacci, could be a serious contender in the Rolex Grand Prix this year. Likewise, Kent Farrington will be looking to round off an impressive 2014 with victory in Geneva.

Steve Guerdat was just 24 when he won the class on Jalisca Solier in 2006. But the most successful Rolex Testimonee at CHI Geneva has been Brazil’s Rodrigo Pessoa, who has claimed the title four times so far – in 1993 on Loro Piana Special Envoy, in 2000 on Gandini Lianos, and in 2002 and 2004 on Baloubet Du Rouet.

The chance to be crowned Rolex champion is, without doubt, a dream for any rider. Ian Millar, 67, has achieved the extraordinary accolade of having competed in 10 Olympic Games for Canada, and was an extremely popular winner of the Spruce Meadows leg of the Rolex Grand Slam of Show Jumping in September 2014. Alas, Millar is unable to attend CHI Geneva this year in his quest to defend his Rolex Grand Slam of Show Jumping title and so a new Champion will be crowned.

Rolex’s support of Show Jumping reaches back more than 50 years. The leading watch-making brand’s long and intimate association with equestrianism shows its appreciation of a world in which fair play, horsemanship and tradition underline great ability, precision and achievement.

Rolex’s first equestrian Testimonee was Pat Smythe, with whom the company formed an alliance in 1957. She was the greatest female Show Jumper ever to represent Britain, and since then Rolex has supported riders in the three Olympic disciplines of Show Jumping, Eventing and Dressage who demonstrate the same brilliant qualities and whose sportsmanship and high standards make them the leaders of their sport.

To view an exclusive preview film ahead of the CHI Geneva show, please click here.