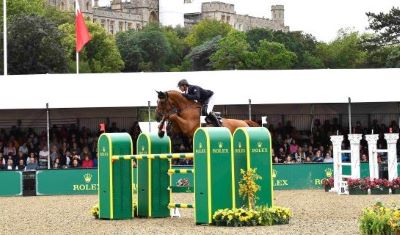 As the countdown to the next Rolex Grand Slam of Show Jumping Major continues, with the CSIO Spruce Meadows ‘Masters’ taking place from 8-12 September 2021, there is no shortage of Rolex Grands Prix action to whet fans’ appetites in the build-up.

For three weeks from 23 June will be the Rolex-supported Knokke Hippique, featuring horses and riders at all levels, from the future stars in the Young Horse competitions, to world-class international jumping, with the CSI3* Top Series Grand Prix taking place on the Sunday of each week. The Rolex Grand Prix took place on Sunday June 27th and was brilliantly won by Jérôme Guery aboard Quel Homme de Hus.

Show jumping returns to Chantilly Racecourse from 8-11 July for the Masters of Chantilly, the highlight of which will be the Rolex Grand Prix on the final day. This ground-breaking new event – which sees Rolex join as Title Sponsor and Official Timekeeper – will take place in front of the Château de Chantilly and its Great Stables, and is set to be a spectacular four days of competition.

For four days from 30 July, the Val-Porée Equestrian Center will host Jumping International Dinard CSI5*, which culminates with the Rolex Grand Prix on Sunday 2 August. Located a stone’s throw from the sea and recognised for requiring precision and technicality, Jumping International Dinard is a popular show on the international show jumping circuit and is once again set to host the world’s best horses and riders as they vie to take the Rolex Grand Prix Ville de Dinard title.