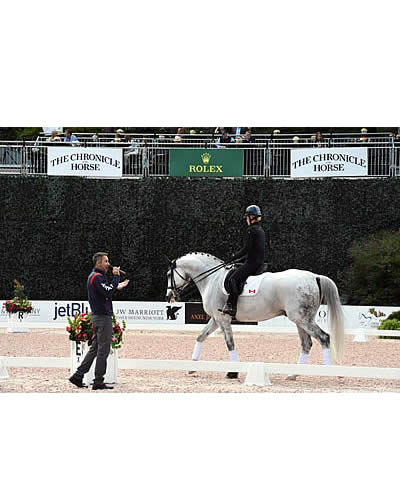 Charlotte Dujardin, aboard Renaissance Tyme, and Robert Dover during Sunday’s Master’s Class. Photo by Josh Walker for The Chronicle of the Horse.

New York, NY – The second annual Rolex Central Park Horse Show wrapped with a day of equestrian demonstrations and family-friendly fun on Sunday. Number-one dressage rider in the world Charlotte Dujardin took to Wollman Rink aboard Evi Strasser’s Renaissance Tyme, along with Olympian and United States Dressage Federation Hall of Fame Member Robert Dover, for a Master’s Class, presented by The Chronicle of the Horse and Breyer.

Dujardin guided spectators and viewers tuning in via live stream through her process of warming up, schooling and cooling down her horses with commentary from herself and Dover.

“I hope you all can appreciate after two times riding this horse Charlotte is able to get on and beautifully show this animal how she works,” said Dover. “The training is so secure that the end result is what you see with Valegro and the other horses she rides.”

According to Dujardin, when riding someone else’s horse, keying into how that rider rides is the hardest part. While continuing to learn more about Renaissance Tyme, she demonstrated Grand Prix movements and shared her philosophies on the development of each gait, transitions and more. “What you see as the end result in dressage is years and years of training,” she said. “It’s a bit like gymnastics with a horse.”

While Dujardin boasts Olympic, FEI World Equestrian Games and European Championship gold medals to her credit, her message to spectators was focused on the well-being of her horse, as well as establishing a solid foundation for success.

“It’s like building a house: if you have a bad foundation, you’ll have a bad house. If you have bad basics on a horse, you’re going to run into problems,” she said. “It’s so important that these horses enjoy every day of their work. I hack my horses on the road; they all go outside and have a normal life, even Valegro. We don’t wrap them up in cotton wool.”

Launched in September 2014, Rolex Central Park Horse Show is the first-ever outdoor, multi-day equestrian sporting event in New York City, showcasing some of the best show jumpers and dressage riders in the world as they vie for top prizes against a backdrop of skyscrapers in one of the world’s most iconic venues. As the event founder, Mark Bellissimo is the CEO of Equestrian Sport Productions and International Equestrian Group LLC; Managing Partner of Wellington Equestrian Partners (WEF), Tryon Equestrian Partners and Colorado Equestrian Partners; and Publisher of The Chronicle of The Horse magazine. In its second year, Rolex Central Park Horse Show will make its triumphant return from September 23 to 27, 2015 and will feature five days of multi-discipline equestrian sport and performances, ranging from Arabians and Dressage to Hunters and Show Jumping. The Rolex Central Park Horse Show will also host the inaugural U.S. Open in the following categories: Jumpers, Dressage, Hunters, U25 Jumpers, and Arabians. For more information, visit http://centralparkhorseshow.com, on Facebook at https://www.facebook.com/CPhorseshow, and follow @cphorseshow on Twitter and Instagram.