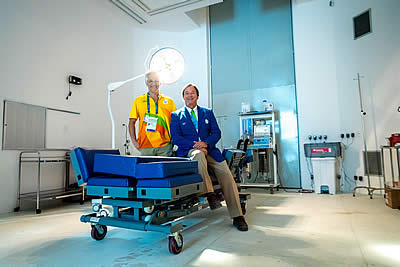 Rio de Janeiro (BRA), 7 August 2016 – The world’s best equine athletes at the Olympic Equestrian Centre in Deodoro are now poised to help their human companions win medals for eventing, dressage and showjumping, and as they focus on the prize they have access to a hi-tech veterinary facility like no other.

Located at the Deodoro stables, the 1,000 sq metre horse clinic features everything needed to keep over 200 horses from 43 countries fit and well throughout the Rio 2016 Olympic Games, with specialists ready to care for every need around the clock. The clinic will also be fully operational for the Paralympic horses that will come to Deodoro next month.

Manned by a 130-strong team of veterinary surgeons, anaesthetists, imaging specialists and medical professionals from Brazil and around the world, the clinic includes the latest pathology, endoscopy, radiography and ultrasonography technology, as well as a dispensary, emergency surgery facility with padded recovery boxes, and specialist treatment stables.

The clinic offers routine supportive veterinary care and, should any emergency first-aid be required, the specialists are on-site to treat the horses. Nine specially equipped horse ambulances will also be on the venue if any horses need to be transported to the clinic. In addition to the clinic, a network of physiotherapists is on hand to keep the horses in top form, while the horses’ temperatures, food and water intake, and weight are permanently monitored by their grooms and veterinary specialists.

While the Games are taking place in Brazil’s winter season, there can be weather fluctuations, so keeping horses cool in Rio is a major focus.

Horses cope with heat very differently to human athletes because of their size but, just like humans, getting their core temperature down after exercise is key.

Every day, over 46,000 litres of water and 400kg of ice to chill the water is being used across the Olympic Equestrian Centre just for washing down horses after training and competition.

Tents housing banks of cooling fans, used for both the equine and human athletes, are available at the finish of Sunday’s eventing cross country phase, and next to the training and warm-up arenas for jumping and dressage, keeping Rio 2016’s most-muscled athletes chilled.

“The health and wellbeing of our horses is the top priority during these Games,” said Brazil’s Dr Thomas Wolff, President of the Rio 2016 Olympic and Paralympic Veterinary Commission. “Many of our horses on site have their own team veterinarians, and it’s great to see how impressed they are with our facilities.”

Wolff (65), who will be working directly with Olympic Veterinary Services Manager, Brazil’s Juliana de Freitas (40), has been the Brazilian Equestrian Federation’s head veterinarian for the last 15 years. He was Brazilian team vet at the Seoul and Beijing Olympic Games, and runs his own practice in Sao Paolo specialising in horses competing in the three Olympic disciplines – Jumping, Eventing and Dressage – and racing.

“Our horses always deserve the very best, and at these first Games in South America, they’re getting just that. We know everything about every horse on site every second of the day thanks to our monitoring system, and with the world’s best veterinary care on offer for our horses we’re now very much looking forward to seeing medals won and new Olympic records set in Rio.”