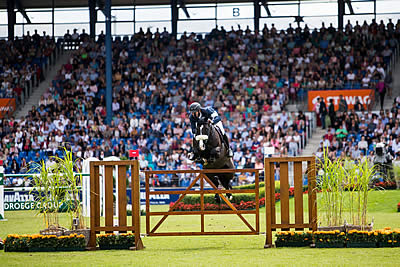 This September, international show jumping fans from around the world will turn their attention to the third Major in the Rolex Grand Slam of Show Jumping, the CP ‘International’ presented by Rolex at the CSIO Spruce Meadows ‘Masters’. Taking place between 4-8 September 2019, the Rocky Mountains of Calgary once again play host to the world’s leading riders and horses for five days of intense competition and equestrian mastery. The event, which attracts 100,000 spectators to its grounds, has been regarded as one of the leading equestrian events in North America. Rolex has proudly been a supporter of the show since 1989.

The CP ‘International’ will welcome the most established equestrian athletes from around the globe to compete for the sport’s most coveted prize. Looking ahead to the third Major of the year, there are some competitors who have consistently performed to the highest level and look to be strong contenders heading into the CSIO Spruce Meadows ‘Masters.’

Rolex Grand Slam live contender and Rolex Testimonee Kent Farrington claimed the top prize at CHIO Aachen this summer, beating seven horse-and-rider combinations in the final round aboard the supreme mare, Gazelle. 40,000 spectators filled CHIO Aachen’s main stadium to watch the unstoppable pair as they flew through the jump-off, producing a clear round in 43.98 seconds. Frequently named one of the fastest riders in the world, the US show jumper has proved time and time again that he is more than capable of taking home the top prize at the next Major.

Great Britain’s star show jumper and Rolex Testimonee Scott Brash has also been on form this season. Great Britain was the winning team at the Nations Cup in Dublin, Ireland in August, which saw Brash achieve a foot-perfect double clear with Lady Harris’s and Lady Kirkham’s Hello Jefferson. As the only person to have ever won the Rolex Grand Slam of Show Jumping, the Scottish-born rider has his eyes firmly set on another victory this year in Calgary.

Rolex Testimonee and Swiss legend Steve Guerdat has once again held his position as the World number one-ranked show jumper for the eighth consecutive month. Guerdat, aboard Venard de Cerisy, narrowly missed out on victory in the Grand Prix at the Nations Cup in Dublin, Ireland, finishing in sixth place. Having also finished in the top 10 in the Rolex Grand Prix at CHIO Aachen with Albfuehren’s Bianca, the Swiss rider will be in a good position to secure his first Major title of 2019.

Another rider who has performed consistently this season is Rolex Testimonee Martin Fuchs, who was crowned European Champion in Rotterdam last week aboard Clooney 51. The talented 27-year-old Swiss rider currently sits at number four in the World Rankings and will be vying for his first Rolex Major win.