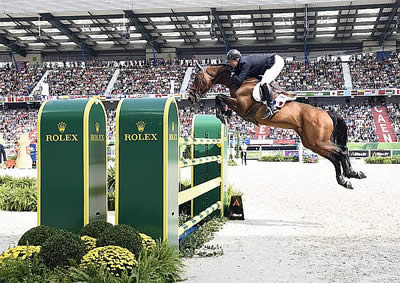 Results after Second Round, Third Competition in Individual Show Jumping

Top Four through to ‘FINAL FOUR’ on Sunday 7 September

Following a day of rest, the top 30 riders in the individual standings after four days of intensive jumping, competed again today in the Second Round of the Third Competition. Beezie Madden of the United States qualified for the Final Four in the Show Jumping competition at the Alltech FEI World Equestrian Games, along with Rolf-Goran Bengtsson of Sweden, Patrice Delaveau of France and Jeroen Dubbeldam of the Netherlands.

It was a tense afternoon in front of a completely packed Stade D’Ornano in Caen, with seemingly the whole of France inside to cheer on the home nation hero, Patrice Delaveau. Both Dubbeldam and Delaveau jumped two clear rounds, while Madden and Bengtsson could afford to knock down one fence each but still qualify. Four riders from four different nations, riding four very different horses, prevailed over five rounds of jumping to now qualify to jump for individual medals and the World Championship title tomorrow.

Despite two superb clear rounds today, the USA’s McLain Ward just missed out on the fourth spot, ultimately from one pole down in the second round of yesterday’s competition, to take fifth place. And finishing seventh in the world was the teenage Irish sensation Bertram Allen riding Molly Malone V. Olympic Champion Steve Guerdat of Switzerland and Rodrigo Pessoa of Brazil missed out on qualification for the Final Four, finishing 11th and 21st respectively.

In a format unique to World Championship competition, the Top Four riders in the individual standings now advance to Sunday’s ‘Final Four’. World championship titles do not come easy; in the ultimate test of horsemanship, each rider will now complete the course with their own horse before jumping the course with each of their competitor’s horses.

Rolex Testimonee Steve Guerdat produced another brilliant riding performance today in front of the many Swiss supporters to ride a perfect clear in the first round, with just one fence down in the second round. Guerdat has ridden superbly all week with just two fences down in total riding his London 2012 winning horse Nino Des Buissonnets.

Commenting after his two rounds, Guerdat said, “I’m very happy with the horse; I think it is difficult to make up so much ground when you start so badly on the first day, but the horse has been in great form all week and that’s the positive I want to remember for this week. The crowd has been amazing all week; from when you walk the course, they cheer for everybody, and for our sport it’s amazing to be able to ride here and gives you motivation to keep on going.”

Beezie Madden (USA): I thought my horse was super today; I thought the rail in the first round was my fault letting him shift off the ground but I don’t think he touched a fence apart from that, so he was fantastic. McLain was also super today; that’s the only deflating part of the week: that McLain did not make it through to the Final Four and he just missed out. It (the Final Four) is a different challenge; it’s not something we do except from here. The best thing about it is that it pleases the crowd. I know all the other horses and have seen them over the years; Jeroen’s is the least experienced so I do not know as much about him, but Jeroen is a good friend so he will probably give me a few tips!

Patrice Delaveau (FRA): I am very happy. Caen is so close to my home and I live 40 km from here; for my fans, my owners, my family it is very very fantastic. The atmosphere is very special for French riders. There is very big pressure for the French riders; we have had five days of pressure and I’m delighted that it has finished for today!

Rolf-Goran Bengtsson (SWE): I feel very good now, in the moment that I finally made it. Of course my fault came very, very early in the course and it was quite a hard fault, of course it was very exciting to keep everything together all the way to the finish line; everything was still very, very open but finally I made it and I feel very good now. There are top riders in the Final Four with very good horses, and it is going to be a great day tomorrow to follow this and see how the situation plays out for the different riders and combinations. To win this would be even better than the European Championship; there is still a long way to go but we are one of the four.

Jeroen Dubbeldam (NED): It was amazing; he (Zenith) surprised me with what he did in the Team Competition and today I thought he would be over as he is very inexperienced at this level and it would be too much today but it wasn’t too much for him and he surprised me, which was unbelievable. He was not tired at all; even in the second round he was still bucking and playing. I want to enjoy the Final Four tomorrow; I have seen it many times before, but this is the first time I have ridden in it. I know all the other horses very well; we see them every week at the other shows so we don’t really need to prepare differently.

Rolex Testimonee, Rodrigo Pessoa (BRA): It’s his (Status) first Championship; he is only 10, and he has less experience than the horses he is going against, so that is a positive side of it. On the negative, it was really hard the other day to let slip a team medal like that. So little margin but that’s the name of the game. Today, to get back into it, Status felt really good, but the water was totally my fault. He is not a very good water jumper and this is something that we have to practise. I came up short and it really annoyed me as I was still in the hunt, but for the mistake in the first round today I can only blame myself really.

Rolex and the World Equestrian Games

The exceptional bond between Rolex and the World Equestrian Games has no doubt been instrumental in attracting 12 new countries to make their debut this year; a glorious achievement in the development of the sport on a global scale. Across the 15 days, approximately 1,200 media will follow 1,000 competitors as they compete across eight official disciplines including the Olympic sports of Show Jumping, Dressage and Eventing in front of over 500,000 spectators.