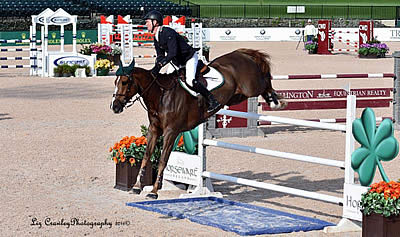 Catsy Cruz (MEX) is the course designer for this week’s FEI tracks in the George H. Morris Arena and is known for her strong building technique, which asks riders questions of technicality and quickness in each class. Moloney and Slieveanorra rode a neat and fast round, which placed them atop the leaderboard.

With 21 combinations contesting the track, Moloney had the advantage of tackling the course last in the order of go, already piloting his other mount Alsvid through the course. Seven pairs rode to finish with fault-free trips, but Moloney left everything on the line, entering the ring with an understanding that he would need to best the 56.30 seconds earned by Parot.

“He was very fast around the turns in between the lines and I think that’s where he upped the time,” said Moloney. “He’s naturally a quick horse and that helps in these speed classes. He felt great and is very aware of what is going on in the ring.”

When Moloney walked the course, he felt that while there were more efficient options available, he preferred to stick with a fast and straightforward approach, ultimately paying off with a victory.

“He always has a chance because he jumps up, but doesn’t waste time in the air. I thought that there were a couple of options to leave out strides and we didn’t even need to do that because it still worked out well,” he explained.

The 2002 Irish Sport Horse gelding (Voltaire x Flagmount Diamond) owned by Equinimity LLC, has been a staple in Moloney’s string for a number of years and performs with a sense of consistency and strength that make him an invaluable member of the top competition team.

“He’s adjustable and naturally very quick around the turns. I don’t always have to take the fastest option, because I know he will make it up around the rest of the course,” he commented. “He’s very experienced, and like I said last week, we try to save him for classes we know he will do well in and this was one of those occasions.”

Moloney will look to continue his success throughout the week as top mount Carrabis Z is entered in the $216,000 Tryon Estates Grand Prix CSI 4* Saturday evening, while Alsvid and Slieveanorra will both contest the $35,000 1.50m Suncast® Classic on Sunday, July 24. Looking forward to a rest for the horses in the coming weeks, but also already preparing for a strong fall campaign, Moloney reflected on his team’s success so far this season.

“I’m just pleased that my horses are all going well. We’re picking up good results at almost every competition and going forward I think we’d like to keep that,” he said.

Grice and High Life, a flashy dapple grey gelding, impressed the judges, earning the two highest scores of the class with an 87 in the first round and an 84 in the handy. High Life plays dual roles as he is ridden by owner Allison Reichenbach in the Adult Amateur Hunter divisions and then transitions to Grice for the larger classes.

“I thought this was a great derby course. I liked how they had the high options early on in the course so that you could impress the judges right off the bat,” said Grice. “The first bending line looked like it was riding as a very long seven and I was a little bit nervous after watching the first few go, but he has a huge step and carried me down early in the seven.”

“The handy round had some great options, which I think really showed off his highlights,” she added.

Grice and Reichenbach have been working with High Life for a year now, as they purchased him from Chad Keenum and have been competing him since, specifically with Reichenbach who competes in the amateur classes.

“He’s been doing the First Year Greens and we’ve kept him at the 3’3″ height to preserve him for next year. He’ll start doing the bigger classes and larger derbies, and Allison will also step him up in the amateur classes too,” explained Grice.

According to Grice, the ring presence of High Life has had a major impact on his success in the ring, influencing his ability to score well with both herself and Reichenbach. She commented, “He likes to show off, but he’s super quiet. He has this tremendous presence in the ring that I think draws people to him. He jumped some of the best jumps of his life in the schooling area before the class, so I knew he was ready.”

The pair who rode two elegant and smooth rounds, finished well atop the leaderboard, which helped them to gain needed experience for what Grice hopes will be a successful fall campaign.

“I would love to get him to indoors and take him to some big places. He doesn’t care very much about the environment. We always want him to be impressed with what he sees in the ring,” she noted. “I think it would be fun to get him to some of those bigger horse shows and show him off.”

Competition at TIEC continues Saturday featuring the highlight class of the week with the $216,000 Tryon Estates Grand Prix CSI 4*. Gates open to the public at 6:00 p.m., while entertainment will begin at 7:15 p.m. Competition will commence at 8:00 p.m. For more information on TIEC and to see a full list of results, please visit www.tryon.com.