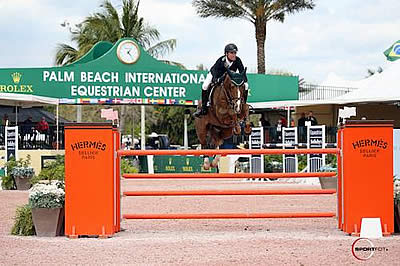 Course designer Michel Vaillancourt (CAN) saw 66 entries and 21 clear rounds over his 1.45m speed track. Julie Welles (USA) and Alexander LLC’s Ryanair de Riverland set a fast pace, second to go in 65.33 seconds, and eventually finished third. Laura Chapot (USA) with her own and McLain Ward’s Quointreau un Prince topped that time in 65.04 seconds and held a long lead, but settled for second place in the end. Third to last in the order, it was Irishman Richie Moloney riding Equinimity LLC’s Slieveanorra who took the win in 64.81 seconds.

The 15-year-old Irish Sport Horse gelding (Voltaire x Flagmount Diamond) had a strong 2016 season and took some time off after concluding his year in November. He started back in week eight at WEF and came out fresh for his first FEI event this week.

“He is naturally a very fast horse,” Moloney said of his longtime partner. “I think I did more strides than the people before me, but his stride is so quick. He is quick across the ground, and he does not waste any time in the air. I just knew to keep going as quick as I could and I would be close enough.

“I saw Laura go,” Moloney added. “I knew it would be hard work to catch her. I saw that the top seven or eight were around 65 seconds, so I knew we had to try to win or else we could be seventh or eighth. He is just quick everywhere. She did fewer strides than me from number five to six; my horse just covered the ground faster.”

Moloney is pleased to have Slieveanorra back jumping in good form and hopes to compete the gelding in more 1.45m classes over the last two weeks of WEF competition.

After aging out of equitation competition at the end of the 2016 show season, Kendra Gierkink of Harpswell, ME had no plans to ever compete in another equitation class. However, on Friday morning, Gierkink rode Casstess HBC to win the Ariat National Adult Medal. The class consisted of a first round and a test of the top four riders. Gierkink and Casstess HBC, owned by Kadley Holdings, LLC, earned the high score in the first round, an 88, and laid down a flawless test to take the blue ribbon.

The nine-year-old Holsteiner stallion by Cassiano had never competed in an equitation class before Friday, as he was previously campaigned by Gierkink’s sister, Addison Gierkink, in the Medium Amateur-Owner jumpers.

“I started riding him at the beginning of the winter circuit,” Gierkink explained. “He decided he doesn’t want to be a jumper anymore, so I’ve just been riding him at home and taking lessons. I was doing the warm-up in this ring on Tuesday and my trainer, Missy Clark, said, ‘Oh, he goes really cute; why don’t you do an Adult Medal?’ We decided to do the Ariat, and he was super!”

All four riders in the test executed the more challenging and shortened track smoothly, but Gierkink’s consistency and smoothness over both rounds helped her win the class.

Speaking of her trips, Gierkink said, “In the first round there were several options, but I decided to ride off of what I was feeling. I liked the course and my horse went around really well, he landed all the leads and was great. Testing is not always my strong suit, but I thought it was a good test!”

Catie Staszak of Boynton Beach, FL piloted Agnes Augusta, an entry owned by East Wind Farms, LLC, to the second place ribbon. The pair earned the second highest score in the first around, an 86. Rounding out the top three placings was Gabi Morris of Bridgewater, NJ. Morris guided her own Hypnotic to a first round score of 85.

Week ten of the 2017 Winter Equestrian Festival continues on Saturday in the International Arena featuring the $35,000 Hollow Creek Under 25 Grand Prix Series Semi-Final, sponsored by The McNerney Family, and the $130,000 Horseware Ireland Grand Prix CSI 3*, which starts at 7:30 p.m. The Bruno Delgrange Large Junior Hunter 16-17 division will determine championship and reserve honors in the Rost Arena. For full results, please visit www.PBIEC.com.