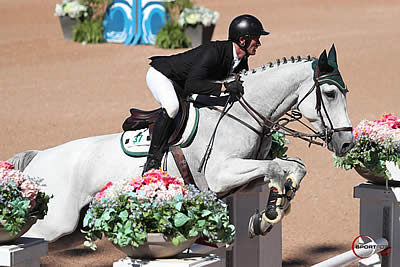 Anthony D’Ambrosio’s (USA) course saw 22 entries test the first round, with only two returning for the jump-off. Moloney explained that he thought it was the triple combination in the first round that seemed to cause the most trouble, but “apart from that it was a really fair course.

“I went first in the jump-off, so I just wanted to be quick and put some pressure on her [Tracy Fenney]. I knew her horse is really fast, so it was important for me to leave all the jumps up,” detailed Moloney of his second-round strategy.

Moloney and the Equinimity LLC-owned 2007 Belgian Warmblood gelding (Cicero Z x Flamenco De Semilly) have been a team for a couple years, shared Moloney. “He’s been competing at the 1.45m and 1.50m level and he has done some FEI Grand Prix as well. He’s a good horse and is very careful.

“Last Sunday I had really good results and then yesterday I was second in the Grand Prix and today I had a win, so it’s a nice way to finish up,” Moloney said. “We’re going to Wellington on Tuesday but Equinimity, whom I work for, has a farm ten minutes away so I’ll be back in April.”

Twenty-six horse-and-rider pairs tested the Archer “Skip” Bailey course in the first round, with Kay qualifying for the handy on three different mounts. “I liked the course. There were a lot of broken lines, a couple of combinations, and not a lot of direct distances or numbers so you could just do what you wanted and show off with different things.

“He felt really good in this class,” Kay said of Ann Rice Ervin’s 2011 Warmblood gelding with unknown breeding. “I think the big ring got his attention and he was able to gallop. I thought he might be a little tired since he also competed in the 3’9” division this week, but he jumped great. We love the big ring!

“I had just a little bit of a bobble in the first round, so I wanted to correct that. We picked up a good canter from the start and just tried to maintain the same pace and have a nice gallop at the last one,” shared Kay of his handy-round strategy.