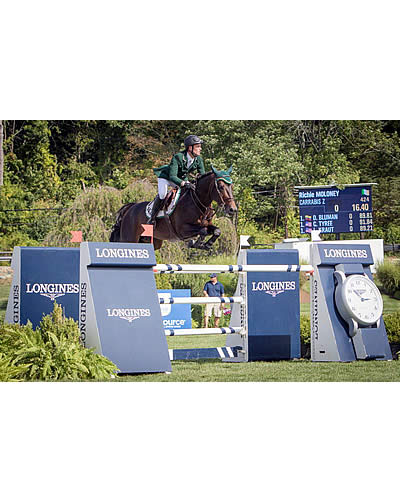 Lausanne (SUI), 14 September 2015 – An accurate jump-off effort from Richie Moloney (IRL) resulted in the only clear round in a six-man field and earned the win at yesterday’s Longines FEI World Cup™ Jumping $215,000 American Gold Cup in New York.

The impressive, 1.60-metre track designed by Alan Wade (IRL) featured 14 obstacles with 17 jumping attempts. Utilising the arena’s graded terrain and natural barriers, Wade’s course managed to hold 31 horse-and-rider pairs, out of the original field of 37, from the final round. Liubov Kochetova (RUS) aboard Veyron was the second in the order of go, and navigated a rail-free round, but with less than a second over the time allowed she recorded the only one-fault score in the first round.

Otherwise, rails fell in a variety of places throughout the course, with increased incidents at the triple and double combinations. “Wade is a horse-friendly, competitor-friendly designer,” according to Frank Madden, the class’s commentator and resident trainer. “He uses no gimmicks and no trickery.”

Daniel Bluman (COL) and Conconcreto Sancha LS recorded the first clear as the third horse-and-rider team to enter the ring. “I had an early draw today in the first round, so I couldn’t really see many people jump before me,” Bluman said. “I just wanted to ride my plan. I found it extremely technical and careful, and it took extremely good horses and riders to jump a clear round today. I was very satisfied with the way my mare jumped. We’ve been together for five or six years, and it never gets old to jump a clear round.”

The next clear didn’t come for another eight rounds, when Catherine Tyree (USA), a 21-year-old student at Northwestern University, piloted Enjoy Louis around a fault-free effort, making for a jump off. Olympic gold medalist Laura Kraut (USA), Moloney, hometown favorite Peter Lutz (USA) and André Thieme (GER) shortly followed with impressive, clear rounds of their own.

When the first three jump off attempts each pulled a rail, the door was wide open for a clear round to claim the victory. “The first round was quite technical,” Moloney said. “The course needed quite a bit of scope. In the jump off, there was no-one clear before I went, so the first four jumps in the jump off I stuck to my plan and went a little bit forward, then toward the end of the jump-off round, I got a little bit careful and made sure I jumped a clear round.”

The strategy of an efficient and accurate ride – albeit slower than the four-fault jump off rounds – landed Moloney at the top, after the two final jump-off performances from Lutz and Thieme recorded faults.

“Richie’s due for a win like this,” Madden commented during Moloney’s round.

“The difference between synthetic sand and grass footing is that it’s not necessarily the fastest round that’s going to be the best on grass,” he added.

Moloney’s winning round was on Carrabis Z, also his winning mount at the CSI4* $210,000 Tryon Grand Prix earlier in the summer. “He’s a 12-year-old stallion and quite a small horse,” Moloney said. “He’s very scopey and very careful. He has a lot of blood, is a little bit hot, and he’s actually green. I got him when he was nine; he’s getting better all the time.”

The Longines FEI World Cup™ Jumping Final in Las Vegas (USA) in April was not an original goal for Moloney, until he won the second qualifier of the East Coast league. “We go to Central Park next then Tryon in October,” Moloney said.

“My goals are to try and be competitive and that’s kind of it, really,” he added. “Long term, I have a few very nice horses, and it would be nice to do Europe next summer and maybe a few Nations Cup classes.”

“I went to World Cup Finals this year in Vegas, and I saw how hard it was and I wasn’t sure I had a horse, or two horses, that it would suit. We’ll see. You never know by the time the end of April comes.”

Although Moloney rides for Ireland, he is currently based in Wellington during the winter and splits his time between Tryon (North Carolina) and Riverhead (New York) during the summer.

“It was great to win here today,” he said. “My horse jumped amazing. He’s been jumping great lately, and it’s nice for him to get the win here today.”

The American Gold Cup earned the top ranking for the best show in the United States earlier this year by the North American Riders Group. “Everything went as planned today,” said Michael Morrissey, the president of stadium jumping and show manager of the American Gold Cup. “It was a picture-perfect day with standing room only.”

All four riders involved in the press conference praised the Old Salem Farm venue for providing the best facilities for the class and for the show. Kraut noted that whether she went first or went 60th in a class throughout the week, the footing remained the same.

“I’m from North Salem and grew up in Fairfield, just 20 minutes from here,” said Lutz. “I’ve been coming to this horse show almost my whole life. I’m so happy that the American Gold Cup is here because we live here.”

“It’s very good to jump on the grass,” added Moloney. “I think there should be more grass fields like this because I’ve been jumping on sand all year and the last two shows, Hamptons and here, have been on the grass. I think most horses prefer (jumping on grass). The atmosphere here was great.”

“It was a very good class,” concluded Morrissey. “The field held up really well. Alan Wade did a really remarkable job today and the whole week. It was great, a great class.”

This year marks the 45th anniversary of the annual American Gold Cup and the fourth year that Old Salem Farm has hosted the show.

In the first round of the Longines FEI World Cup™ Jumping $215,000 American Gold Cup there were six clear rounds, one with one fault, six with four faults and twelve with eight faults. Four horse-and-rider pairs were eliminated.

Conor Swail and Viva Columbia won Friday’s $85,000 American Gold Cup Qualifier, presented by Windsor Show Stables, but missed the jump off with twelve faults in the first round. There were 14 clear rounds in last Friday’s qualifying class, in comparison to only six clear rounds on Sunday.

The top five horses in the Longines FEI World Cup™ Jumping $215,000 American Gold Cup were all bays; two were stallions, two were geldings and one was a mare.

Richie Moloney (IRL): “Carrabis Z jumped really well at Hamptons Grand Prix, and I had the last fence down. He’s been jumping great, so I had it in my head that I really had to go for it and win today.

“When I tried him, he was late in his eight-year-old year, and he was actually very green for an eight-year-old. He has a lot of blood, a little bit difficult to ride, but he’s very careful. Even though he’s 12 this year, I feel he’s just starting to really improve at the start of the summer, so hopefully there’s more good things to come.

“I was nervous just to do well because I really wanted to go clear in the first round, and just nervous because I wanted to do well for my horse because he’s been jumping so good.

“I work for a very good sponsor Equanimity, an American family, and they’ve been great to me. They’ve bought a very good team of horses, and I’m very lucky to have them as owners. I appreciate them very much.”

Daniel Bluman (COL): “This class with Sancha is one of the last classes of the year. She’s not really a horse that I would like to do much with in the indoor circuit just because we’ve already jumped a lot. We had the Pan American Games, Florida and a good summer, so I was looking to come here for the first time with this horse.

“I’ve been here before but not with her (so I wanted) to try to give it a nice show to the grand prix. I know it was a big class and it feels great. It’s definitely different for us growing up in South America. It’s not usual to ride in fields like this. It takes a lot of concentration, and it’s fun. It’s a different sort of challenge.

“That’s a very special horse for me. I started my five-star and international career with her and she took me to the Olympic Games, my first Pan American Games, and we’ve learned a lot together. We’ve been through a lot of things and now she’s 12 years old. She’s feeling as good as ever. We know each other better, we know how to make a good plan that fits well for her and fits well for me and I could stay all afternoon here speaking about her. You can imagine, she means a lot to me and to get a result today it’s good for her, for her name, at least.”

Peter Lutz (USA): “The horse I ride, Robin de Ponthual, owned by Katherine Gallagher and Michael Miller, I’ve been riding for about a year, and we just stepped up into the grand prix this spring, and this summer we’ve had some really nice results. This was our first jump off at this level so again, I was really thrilled with how he went and with our placing. I’m just getting to know him, and he’s been super.”

Held over five days at Old Salem Farm, New York, the American Gold Cup brings together a diverse crowd of elite equestrian athletes, discerning horse owners, excited fans and young hopefuls, eager to watch their idols. In addition to the competition ring, the international Jumping event features high-end shopping. From top-notch equestrian tack and equipment to fashion, jewelry, antiques, art and much more, the scenic outdoor boutiques offer the perfect opportunity to shop during breaks from the competition action.

The venue boasts a state-of-the-art stabling facility, a historic and pristine grass grand prix field and outstanding competition and schooling arenas, all of which are surrounded by one of the world’s most charming and picturesque venue settings. For the past four years, the North American Riders Group (NARG) has recognized the Old Salem Farm competitions on their NARG Top 25 List.

A total of 14 athletes from the new North American League will qualify for next year’s prestigious Longines FEI World Cup™ Jumping Final, which will take place in Gothenburg, Sweden on 23-28 March 2016.

The new North American league was launched by Beezie Madden, the most decorated US female equestrian athlete of all time, American Gold Cup winner and FEI Solidarity Ambassador Jessica Springsteen, and Hannah Selleck, team and individual gold medalist at young rider level and one of the sport’s up-and-coming stars. The full launch release is available here: https://goo.gl/kCIsyW.