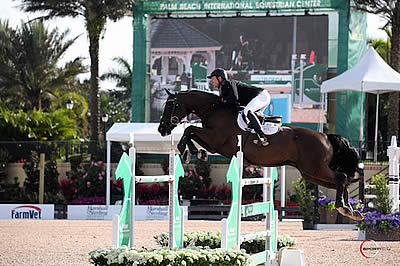 WEF 4, sponsored by Ariat®, runs February 3-7, 2016, at the Palm Beach International Equestrian Center (PBIEC) in Wellington, FL. The week will feature the Great Charity Challenge presented by Fidelity Investments® on Saturday, February 6. Other highlights include the $35,000 Ruby et Violette WEF Challenge Cup Round 4 on Thursday; the $35,000 Illustrated Properties 1.45m Classic and the $25,000 Artisan Farms U25 Grand Prix Team Event, presented by the McNerney Family, on Friday; the $35,000 Suncast® 1.50m Championship Jumper Classic on Saturday; and the $216,000 Ariat® Grand Prix CSI 4* at The Stadium at PBIEC on Sunday. The 12-week WEF circuit runs through April 3 offering more than $9 million in prize money.

Guilherme Jorge (BRA) is the international course designer for week four competition at PBIEC. Jorge set the opening speed track for the $35,000 Douglas Elliman 1.45m with 59 entries and 22 clear rounds. Thirty-eighth in the order, Richie Moloney and Alsvid clocked the winning time of 60.07 seconds.

Moloney and Alsvid, a 15-year-old Hanoverian gelding (Escudo I x Azur), had an incredible 2015 season and the rider was happy to get off to a good start with a win early in 2016.

“From this last summer onwards he has been really good,” Moloney noted. “This is his sixth FEI class to win since June, so he has been great, and he is 15 now. He is definitely in his prime and he is very good at that (1.45m) level. He is quick without having to try too hard.”

Moloney detailed his winning round, stating, “From jumps one to two I decided to go around, but I did the same strides other people were doing coming inside. Then I left out a stride to number three, which probably helped. I think it was even the rest of the way; I just kept going forward. It was smooth after that, and lucky enough, we got the win.

Alsvid will continue to jump the 1.45m speed classes throughout the winter circuit, where Moloney hopes he can get more wins like today.

Also competing in the International Ring on Wednesday, the $6,000 1.40m speed, sponsored by Illustrated Properties, was held in a California split with 170 entries in total. Richard Spooner and Legacy Stables LLC’s Tuxedo took home the win in Section A with the fastest of 39 clear rounds. Peter Wylde and Kathleen Kamine’s Royal Flush topped Section B.