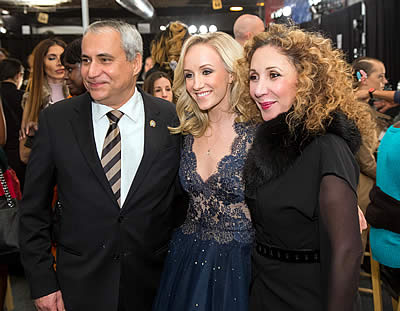 Lausanne (SUI), 10 March 2016 – Reem Acra, the internationally renowned fashion designer, has extended her partnership with the FEI World Cup™ Dressage Western European league and series Final for a further three-year term through to 2019.

The celebrity designer, who has dressed some of the world’s most famous Hollywood A-listers, including Angelina Jolie and Halle Berry, and music icons Taylor Swift and Beyonce, also sponsors the FEI’s annual Best Athlete award and has designed gowns for award winners Charlotte Dujardin and Adelinde Cornelissen.

“We have worked together with Reem Acra for six years now and are delighted to have this opportunity to strengthen our ties and take our partnership to another level, including the brand’s continued involvement in the FEI Awards,” said FEI President Ingmar de Vos, who flew to New York to sign the new agreement.

“It was fascinating to see Reem Acra in her own creative environment behind the scenes at New York Fashion Week. The focus on perfection is in many ways very similar to the work that our athletes go through behind the scenes to prepare for a winning Dressage test. This new chapter in our partnership will generate further global exposure of the Reem Acra brand, demonstrating the synergies between the brand and our sport, and attracting new audiences to Dressage.”

“We have already established a very successful partnership with the FEI during our time as title sponsor of FEI World Cup Dressage and really enjoy being associated with this prestigious Dressage series,” Reem Acra said. “I absolutely adore the grace and elegance of horses and the harmony of dressage resonates with me and with the style and elegance of my creative designs. I had no hesitation in extending our partnership to another level of commitment, to continue my association with equestrian sport and this world class event.”