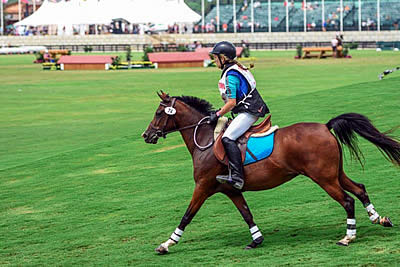 Mill Spring, NC – August 1, 2016 – More than 600 young riders, ages 12-25, traveled from across the United States to Tryon International Equestrian Center (TIEC) to participate in the 2016 U.S. Pony Club Championships East hosted from Wednesday, July 27, through Sunday, July 31. In addition to the competition, which featured seven disciplines of equestrian sport, Pony Club members and their families were treated to a week’s worth of entertainment and fun.

On Friday night, TIEC welcomed the world-famous Double Dan Horsemanship, a duo who entertains crowds around the world, performing their electrifying liberty horse demonstration and displaying the ultimate partnership between horse and human. Afterward, attendees stayed to watch “National Velvet” on the jumbotron in the George H. Morris Arena as part of TIEC’s weekly “Friday Night at the Movies” series.

Courtney Hoffman, a dressage competitor, particularly enjoyed the added entertainment. “The nighttime activities, those were really fun,” said Hoffman. “We got to hang out with our whole region. The lip sync was really fun! We actually didn’t sign up; we were the ones who kept dancing in the bleachers and who kept trying to get on the jumbotron.”

Both TIEC and U.S. Pony Club share a goal to grow equestrian sport by making it accessible and available to anyone. For TIEC, the entertainment events serve a greater purpose in growing the sport.

“Pony Clubs stand for horsemanship, teamwork, respect for the horse, respect for oneself, service, and education, and those are all attributes and areas of focus that we want to be true of Tryon Resort and Tryon International Equestrian Center,” said Sharon Decker, Chief Operations Officer for Tryon Equestrian Partners Carolinas Operations. “We think we make great partners because one of our objectives is to grow equestrian sport and pony clubs are where it all begins, so it’s been a true honor to host the United States Pony Club Championships East this week and we look forward to a long relationship with pony clubs.”

Building upon this mission, TIEC also held a challenge during the week to give at least 100 kids their first pony ride. More than 100 kids participated in the challenge and TIEC awarded a $250 Pony Club scholarship to three participants chosen at random.

“The purpose of these fun events is to expose Pony Club and equestrian sport to our local audiences and generate interest in the sport,” said Mark Bellissimo, managing partner of Tryon Equestrian Partners. “This championship event brought many new families to our Carolinas region and we wanted to give these young riders an audience to celebrate their major accomplishments with them. Everything we do at TIEC goes back to our mission of growing interest in equestrian sport.”

Pony Club member Bella Curtis appreciated the fan fare from the crowd. She said, “During the senior games [on Saturday night], it was really cool that a lot of people were seeing mounted games for the first time and they were cheering like it was a football game because a lot of the time the only people who watch games are the other people who ride games.”

The duration of the week hosted Pony Club riders competing in seven different disciplines simultaneously around the show grounds, showcasing the magnitude of the TIEC venue what the facility can accommodate in terms of championships competition. Pony Club eventing competitors also had the privilege of being the first to ride on a portion of the new cross-country course at TIEC.

For many Pony Club competitors, the TIEC facility was one of the first that allowed different disciplines to intermingle and celebrate together in a unified Pony Club atmosphere.

“[The TIEC facility] lets others come together because sometimes during Championships you don’t get to communicate with other people from other regions and you’re really able to come together as a whole Pony Club here and I think that’s really cool,” said Pony Club member Georgia Diroberto.