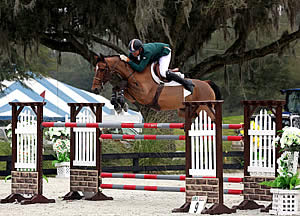 Riders vied for the prize money, sponsored by SmartPak, and a chance to qualify for the Triple Crown over Doug Russell’s course, which included a triple and a double combination. The footing was excellent despite showers during the day and faults were evenly scattered throughout. Two riders were unseated in Round 1. Six horses were clear over the course, but Derek Petersen from Archer, Florida, aboard Maddie Skimming’s Cassevel, had one time fault just missing an opportunity to compete in the jump-off and placing sixth.

The jump-off, with five competitors, proved to be a real nail-biter according to Judge Mel Stone, who kept hoping for a clear round. Williston’s own Aaron Vale, riding Troy Glaus’ horse, Quidam’s Good Luck, was not lucky enough to jump clear. A rail at the final jump cost him four faults but a fast time of 40.389 set the mark and was good enough for third place.

Jared Petersen riding his father Derek’s Titus 2:11 jumped like the winner again until the final jump where he had an uncharacteristic rail stopping the clock at 45.358. This horse and rider combination has had some impressive feats in the past at Hits Ocala, winning three Sunday Grand Prix in a row in 2013. But their rail and time placed them fifth Thursday.

MTM Farms’ MTM Centano and Tracy Fenney from Flower Mound, Texas had an early rail so she rode to the fastest four fault round in a time of 40.293 to earn second place. One of 2014’s leading riders with five grand prix wins, MTM’s Centano’s ability to jump from anywhere makes him a formidable competitor.

Charlie Jayne of Wellington, Florida, riding his own Playboy, knew that a clear round would secure the win so he rode a careful clear and stopped the clock at 49.791, winning the lion’s share of the prize money and a head start at qualifying for the Great American $1 Million. Spectators held their collective breath as he cleared the final fence to produce the only double clear round.

Lisa Goldman of Hawthorn Hills, Illinois and Centurion B, owned by Mary Goldman, have won more than their fair share of Grand Prixs in the past at HITS. As the final competitor in the jump-off, the table was set for a fight to the last, but it was not to be. A rail at the second part of the combination cost them four faults and their time of 43.149 placed them fourth.

The $2,500 Brook Ledge Open Welcome kicked off the 2015 HITS Ocala Winter Circuit Wednesday with 15 eager to start their season with a win in the Ocala Horse Properties Stadium. Six riders were able to shake off the winter blues by jumping fault-free in the first round over Ocala course designer Doug Russell’s inviting 1.40 meter course of 14 jumping efforts and two combinations.

First to tackle the jump-off was Seth Vallhonrat from Newtown Square, Pennsylvania on his own Cellisto, who opted for a conservative clear in 44.774 seconds. His clear round earned him fourth place. Next up was Topeka, Kansas junior superstar Hunter Holloway, riding Hays Investment Corp.’s I Love Lucy. She set the “Great American Time to Beat” when she stopped the clock in a blazing 35.668 seconds. That time held up and I Love Lucy welcomed in the New Year with the win.

Derek Petersen from Archer, Florida, aboard Maddie Skimming’s Cassevel, gave Holloway a run for the money, but came up short with a time of 37.626 and a clean round to finish second. Shachine Bell riding Katie Tyler’s Kroner Z had an unfortunate rail at the last fence, finishing with four faults in 39.951 seconds to finish fifth.

Jared Petersen, riding his father’s Via Dolorosa, rode with the fourth clear round in the jump-off and a time of 39.252 to finish a close third. Hayley Waters from Sparr, Florida riding Chuck and Dana Waters’ Coralina had a rail at fence four finishing with four faults and a time of 42.201 to finish sixth.