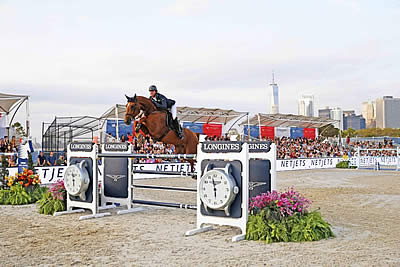 New York, NY – The power pairings of Explosion W and Ben Maher and Clooney 51 and Martin Fuchs propelled London Knights to victory in the GCL New York and the overall 2019 Championship with drama until the final seconds.

Four flawless clear rounds were delivered by the unbeatable Knights who secured a historic second GCL title win after a rollercoaster season saw their duel with St. Tropez Pirates dominate the team series this year.

The Knights finished three points ahead of St. Tropez Pirates, with a total of 326 points this year. Madrid in Motion secured third in the Championship with 303 points, with the Shanghai Swans just hanging onto their fourth place, meaning they too will fast-track to the semi-finals at the GCL Super Cup at the GC Prague Playoffs.

The dramatic backdrop of the Lower Manhattan skyline and the Statue of Liberty provided one of the greatest stages for top-level show jumping as the world’s top riders and horses competed in the LGCT and GCL Finals for the first-time ever on Governors Island.

New Yorkers and visitors to the City filled the grandstands and cheered on the teams including home city team New York Empire, owned by Georgina Bloomberg who was watched by her father and former New York Mayor Michael.

It was all about big names, big views, and big guns as the Knights fielded their top horses in their bid to seize the GCL Championship.

“For me, I’m biased but I have an incredible horse. To team up like this is a unique concept, where can you bring these kinds of horses together from different countries and compete like this. It was memorable day that’s for sure.

I’ve been to New York a couple times before to visit. It’s an incredible city. I don’t think anyone was sure what to expect. But, when we came here, like Global Champions does, they make the logistics incredibly easy for the grooms and the horses. The accommodations and how we are all looked after is five star. For the first year, I think the show is a huge success. There were big crowds here; it was well advertised and when I came out of the ring there were many people saying they enjoyed the day so hopefully this will grow.” ~ Ben Maher

It was ‘game, set, and match’ after Ben Maher (GBR) wrote history aboard Explosion W in an extraordinary Longines Global Champions Tour Grand Prix of New York, taking the LGCT Grand Prix win and the 2019 Championship title just hours after helping to secure the GCL team series crown for the London Knights.

In the city that never sleeps it would turn out to be a superlative showdown with a script that sporting dreams are made of. With spectators filling the rafters of the grandstand and positioned in every inch of space, the equestrian world watched as the knife-edge Championship reached its conclusion on Governors Island.

Devos (BEL) lead the overall ranking by just one point, but with pressure reaching fever pitch it was Ben Maher (GBR) who kept a cool head in a seven-rider jump-off to catapult himself to the title win – his second after taking the 2018 Championship.

A beaming Ben said: “I knew it would be a tough weekend – the dream was to win the team [title] and the individual. It doesn’t happen often. What a horse – he’s incredible. He understands me, I understand him, we have a great connection, and it’s a pleasure to be in the sport like this.

“It’s incredible [to win the title for a second year running]. Last year was unexpected; this year I’ve used Explosion a little less; I’ve used Concona, Madame X and F One USA, so I’m lucky to have so many great horses and great owners.”

In a touching sporting moment, Maher praised his rival Pieter Devos, who was just beaten into second place in the Championship. “[Pieter] gave a great fight; it was a push all the way to the end. I’m sure he’s going to come back strong.”