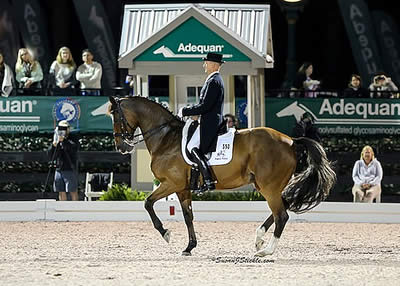 Wellington, FL – February 6, 2015 – Lars Petersen (DEN) and Mariett won yet another “Friday Night Stars” FEI Grand Prix Freestyle at the 2015 Adequan® Global Dressage Festival (AGDF), this time in the CDI 5* competition presented by Diamante Farms. Petersen and Mariett scored a 79.175% for victory. Steffen Peters (USA) and Legolas 92 placed second with a 76.200% and Mikala Gundersen (DEN) and My Lady came in third scoring a 75.725%, all riding in front of a completely packed crowd, the biggest audience in history at an AGDF event.

Nearly a personal best for the duo, Petersen and Mariett produced a test that was flawless and fluid, a routine result for the pair’s performances so far in 2015. “Tonight was a very good feeling. I think Mariett actually liked that the atmosphere was so big and she knows when people are watching. I thought this was one of my best freestyles on her ever,” commented Petersen.

Legolas 92 was excited in the electric atmosphere and Peters commented on what it was like to try and keep the gelding relaxed, soft, and together. “Tonight his energy was a little bit more controlled than yesterday, which was the goal, and that is a good thing. This is good experience for him. If we qualify for the World Cup, that arena will be (even) bigger and more difficult than this one.”

The pair has a breadth of international experience, competing for the United States at the 2014 Alltech FEI World Equestrian Games in France, but the atmosphere was a factor for “Legolas” this weekend. “One thing with him being 13 is that there is certainly no lack of energy, and I doubt by the time he’s 18 that will change,” laughed Peters.

Gundersen, who has been hot on the heels of her Danish teammate Petersen this entire season, was pleased with her continued improvement on My Lady so far. “I love going down the centerline. It is my favorite part of the test. She gets so big and once she hears that music start to play, it just gets her going. The further we get down the centerline, the passage just continues to get bigger and bigger, and she’s always so on it when the music starts,” said Gundersen when describing how it feels to enter the ring on a Friday night.

Judge at C, Lilo Fore, was truly excited about the entire class of Grand Prix Freestyles tonight and was eager to express to the riders how impressed the judges were with the quality of performances displayed. “I think the horses in this class were absolutely top quality and also I think some of the music which these horses now have is very exciting,” she commented. “When you’re sitting in the judge’s stand and you’re tapping your foot and going with the music, you can only imagine what the audience is doing. I think that is a really good sign and the horses we saw tonight were absolutely exceptional. When you think about the entire class, nearly everyone was above a 70% and that is a wonderful step in the right direction for the sport here.”

Devon Kane and Kevin Kohmann both joined the press conference as representatives of the Week 5 CDI 5* sponsors, Diamante Farms. “You couldn’t have asked for a better crowd, a better competitor list, a better venue. It really doesn’t get much better than this,” said Kane, who also competed in the class scoring a 70.700% aboard Destiny. “A few years ago this didn’t even exist; it was just a dream. To actually have it here and have the sponsorship money driving people to want to be here and the incredible quality of competition, it is an unbelievable dream come true. Kohmann mirrored Kane’s response, adding that nights like these will continue to draw more international presence at the show in the future and will only strengthen the sport here in the U.S.

Allyn Mann, Director of Luitpold Animal Health, was thrilled with the turnout and the atmosphere of the Week 5 “Friday Night Stars” event. “You always dream and you always think that these things can be wonderful, but this event has really exceeded expectations. I thought two weeks ago was amazing and then you wonder how it could get any better, and it did,” he expressed.

As with the new tradition of each “Friday Night Stars” event at the 2015 Adequan® Global Dressage Festival, several awards were given throughout the night to top performing pairs and to the owners of these winners. The Best Horse Owner Award for the AGDF Week 3 National competition, presented by Jill Irving, was awarded to Sarah Schmidt. The Best Horse Owner Award in the Prix St. Georges class was awarded to Mr. and Mrs. Bechtolsheimer, owners of class winner, Unique, ridden by their daughter, Laura Tomlinson for Great Britain. The Best Horse Owner Award for the Grand Prix Freestyle presented by Wellington Equestrian Realty was awarded to Marcia Pepper for the third consecutive freestyle competition in a row. The Adequan® High Score Award for the Grand Prix Freestyle was also given to Petersen for his incredible 79.175% aboard Mariett.

Earlier in the day, Christoph Koschel (GER) and Rostropowitsch NRW finished first on a 75.100% in the FEI Grand Prix Freestyle CDI 3*, presented by Wellington Equestrian Realty. The duo put together a lovely test during the horse’s first competition ever in the United States.

The horse arrived in Florida in mid-January and suffered an untimely spider-bite upon his arrival, which led to Koschel giving him a few more weeks off than previously planned. “When I came into the stable, it looked awful to be honest. It has healed great and we’ve been taking very good care of it, so he is good to go now,” Koschel explained.

As for their test, “Rusty” put together a lovely freestyle considering the pair hadn’t had much time to practice the routine. “He may have lacked a little bit of conditioning this week from being out for the spider bite, but I’m happy with the test,” said Koschel. “We had a few mistakes in the canter tour, a small mistake in our one-tempis, but he was very nice and in front of the leg the entire time. I really liked the ride.”

The delay to the start of their AGDF season will not affect the rest of their plans at circuit, and Koschel will bring “Rusty” back in two weeks for the FEI CDI 4*/3* at AGDF 7. The horse is a staple in Koschel’s string of competitive mounts, which he attests to the horse’s incredible personality. “He’s a very sweet horse, a bit like a big dog to be honest, which you wouldn’t normally expect from a Grand Prix horse. The kids play with him in the stall when he lies down. He is just so well-behaved,” he related.

Crowd favorite, the young Juan Matute, Jr. (ESP), placed second in the class aboard his longtime mount Don Diego Ymas. The pair earned a 72.375% in their second CDI Grand Prix Freestyle of the 2015 season. “I really enjoyed it. It is always so much fun. This is our second freestyle, and I think we’ve done great. I have another routine in the works, but we’re going to stick with this one at the moment and improve on it,” he said.

At only 17 years old, Matute is gaining valuable experience this season competing at the Grand Prix level. The switch from Prix St. Georges to Grand Prix is a large jump for many riders, and Matute feels that he is beginning to feel confident at the new level. He explained, “It’s a bit intimidating sitting up here next to some of the best, like Mr. Koschel, but like I said, it’s a challenge and I enjoy it. It is always so fun. I have five CDI horses here, and we have a great season to look forward to.”

As for the partnership he has with Don Diego Ymas, Matute says the gelding has taught him everything he knows and they have an established relationship that gives him confidence in the ring. “I did my first CDI as a junior on him in 2012, and we’ve grown up together and gotten to where we have,” Matute said. “I feel like we’ve built this relationship that now when I go into the ring, I feel such a strong connection with him and I trust in him, and he trusts in me. We have a special magic that just helps to make everything flow.”

Laura Tomlinson (GBR) and Unique were two for two this weekend in their first week at AGDF, taking home the win in the FEI Intermediaire 1 CDI 1* class presented by Mission Control, scoring a 74.632%. The pair, who has had a strong start to their 2015 season here in Florida, will only look to improve this year as Tomlinson begins to prep the mare for Olympic qualifications for Rio de Janeiro in 2016. “My goal is ultimately Rio and the other competitions between now and then are stepping stones to that point,” she explained. “When I have her at a point where I feel like she’s comfortable with the Grand Prix tests, I will say yes to being on a team, and if not and she needs more fine-tuning, then that’s fine too. Rio is the name of the game, and everything has to be done with that in mind.”

Diane Creech (CAN) and Robbie W continued their success today in the Small Tour classes as the pair placed third in the FEI Prix St. Georges CDI 1* sponsored by Mission Control yesterday and capped off today with another top three finish, coming in second with a 73.368%. Creech had nothing but wonderful things to say about “Robbie” and his owners, Doug and Louise Leatherdale. “This was a personal best for us today. Robbie is just such a great guy, and he’s so talented and has the biggest heart,” she expressed. “Doug and Louise bought him almost five years ago, and I’m so grateful for them to give me a chance to ride a horse like this. They’re the best people ever, and they really love the horses. It is incredible to have their support. It’s really like a big family.”

The fifth week of the AGDF continues tomorrow with the FEI Grand Prix Special for the CDI 3* and CDI 5* divisions.

To learn more about the Adequan® Global Dressage Festival and for schedules and ride times, please visit www.globaldressagefestival.com for more information. The FEI CDI5*/3*/1* competition will continue through Sunday February 5, 2015.