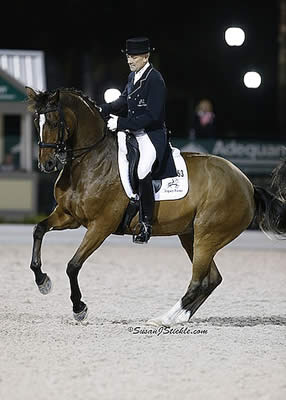 Wellington, FL – February 5, 2015 – Lars Petersen (DEN) and Mariett were victorious again this season at the 2015 Adequan® Global Dressage Festival (AGDF), this time in the first class of the highly anticipated FEI Grand Prix CDI 5* presented by Diamante Farms. Petersen and Mariett topped the large Grand Prix class with a score of 74.160%, followed by Danish teammate Mikala Gundersen (DEN) aboard My Lady finishing with a 72.960% and Kathleen Raine (USA) and Breanna coming in third on a 72.420%. AGDF 5 competition will continue tomorrow, February 6, with the FEI Intermediaire 1 CDI 1* presented by Mission Control and FEI Grand Prix Freestyle CDI 3* presented by Wellington Equestrian Realty during the day, and the highlight class of the week, the “Friday Night Stars” FEI Grand Prix Freestyle CDI 5* presented by Diamante Farms, beginning at 7pm with a special salute to Olympians from Diamante Farms prior to the class.

Petersen and Mariett are no strangers to the winner’s circle this season, as this is the duo’s fourth win in Large Tour classes at AGDF in 2015. In true form, the pair performed another nearly flawless test to bring home some of the highest marks they have received in a Grand Prix yet this season. “We’ve got it all wrong – she’s getting younger and younger and I’m just getting older and older, that’s how I think it really is,” joked Petersen when asked about the mare’s 17 years of age. “The thing now, at this stage, is what you do at home before you go to the show. I don’t practice that much. I just focus on keeping her loose, fit, and in good condition.”

Gundersen, who has also had a very successful beginning to the 2015 season on My Lady, had another great test under the lights with the mare as their scores continue to improve. “She loves this atmosphere, and I know she will be even better tomorrow,” she said. “I’m really happy with where I am. Looking at the starting list for this class, there are some very big names and I would have been happy to end up in the top five. Finishing where I did is really just a dream.”

Just back from a five-month trip in Europe, Kathleen Raine and Breanna had a strong showing for the first competition back on U.S. soil since June 2014. “I was thrilled with my ride tonight. We had a few little mistakes, but she was super consistent and she handled the atmosphere great,” she stated. “I’m really happy with how she’s doing. I think the experience in Europe really helped her. She’s much more mature.”

Tonight was Raine’s first experience competing at AGDF and she was impressed with not only the facility, but also the quality of footing, as both Petersen and Gundersen agreed. “I’m not only so impressed by this facility, but the way the footing held up today throughout all of the rain we got early in the day was truly amazing. I was just so impressed with how well it was taken care of today with the weather,” Raine said.

Peters was quick to give the young mare praise, as she is still very green at the Grand Prix level. “She amazed me the first day I sat on her. She’s just so focused. We had a few little rookie mistakes today, but there are a lot of wonderful things and the best thing is that she does it with so much lightness. There’s a lot of expression, and she feels so beautiful in the contact,” he said. The mare, who has only done one Grand Prix prior to competing today, has a bright future ahead of her with Peters in the irons.

Rosamunde, who contested Small Tour classes in Europe last year, stepped up to the plate when Peters began asking for Grand Prix movements. “We started playing with the movements at summer training camp, and I wouldn’t compete her in the Grand Prix if I felt like I was pushing the movements. But once we started to try, it worked out great,” he commented. “The test two weeks ago was better, but it is still not a test in any way, shape, or form, I could be negative about. It’s really just a great to have an eight-year-old Grand Prix horse.”

As to a comparison between his two most established partners and Rosamunde, the now retired Ravel and his other Grand Prix mount here at AGDF, Legolas 92, Peters said there are similarities between the three but she seems to be more like Ravel at this point in her training. “They are all very different horses and the main similarity is that they all have a wonderful attitude and it is an honor to work with them each and every day. I do feel like her canter and canter pirouettes and also her trot half passes feel quite like Ravel’s, so you know he taught me so well, and I think Rosie will benefit from that,” he related.

Arlene Page, coming off a strong start to her 2015 season at AGDF, was pleased with her test aboard Woodstock, as it exuded confidence and was much more relaxed than her last outing with the gelding two weeks ago. “It’s nice to just do a solid and clean test. There was a lot of nice, steady canter work and a lot of confidence,” she said when describing her ride. “I am really lucky that I was able to experience this environment because he was a lot more content around the things that grabbed his attention two weeks ago. He was much more secure in his own body today, and I like that feeling a lot.”

The partnership between Page and Woodstock is relatively new, as this is her second year with the gelding and their connection and trust has grown incredibly since she took over the ride. “At this stage in the game it’s about building him up carefully. I really believe he can be a top, top horse, but I don’t want to leave a hole anywhere in his training. He needs to continue developing and also building the trust in himself and in me,” she explained. Woodstock has consistently improved upon his scores throughout this half of the AGDF season and Page hopes to continue that improvement throughout the rest of the year.

Page, who is based in Wellington for majority of the year, feels so fortunate to live close to the AGDF grounds, as it gives her horses the experience they need to progress through the levels. “I just want to continue to give him these great opportunities with great venues. I have to say this venue is as fantastic as anywhere you could find in the world and for me to say that it’s in my backyard is really just terrific,” she expressed.

Charlotte Jorst brought an incredible energy to the press conference, and her excitement was palpable as her third place finish was a personal best in a Grand Prix class for her and partner Kastel’s Nintendo. “Just sitting next to these people right now. Last year, I read about them and this year I’m sitting here so it’s pretty exciting,” she smiled. “I didn’t have any expectations. I was just out there to try and learn as much as I could and my goal today was to just get a clean test and see if I could get that done.”

The duo will look to improve upon their scores in the next few weeks of the AGDF circuit and then Jorst will head back home to Reno, NV, to continue training and see what the pair can accomplish before next fall. “I would love to go ride in Europe. I’ve never trained there before or done any of the big shows. I would love to get on a team. I would go and do it if I ever got the chance,” she said.

Laura Tomlinson (GBR) and Unique topped the large FEI Prix St. Georges CDI 1* class presented by Mission Control, scoring a 73.321% to take victory. This is the pair’s first competition back since 2013. Tomlinson took a leave of absence from competition as she was expecting her first child with husband, polo player Mark Tomlinson. After giving birth, Tomlinson hopped back in the saddle and started to prepare for the 2015 season, which started with her win today. “It’s great to get back in the ring. It was my mare’s first time out since 2013. We just needed to get back in the ring together, and I am very happy with the way she went,” she said.

As for their time in Florida, Tomlinson hopes to create enough confidence with Unique that it will allow the duo to make a smooth transition to Grand Prix in the coming weeks. “In an ideal world she’ll be on a championship team for Britain by the end of the year for European Championships but to be honest, I won’t know until we do a few Grands Prix and see where we are,” Tomlinson commented. “I know I’m going to have to ride very low-key and more for confidence. We can’t fuss too much over the details at this point, and that will give me the ability to get a real idea of where we are and see how far I can push the buttons to really make it good. She’s a proper diva. You have to make her feel comfortable or she won’t agree.”

Olivia LaGoy-Weltz (USA) and Rassing’s Lonoir followed in second scoring a 71.947%, the only U.S. pair placing in the top three. LaGoy-Weltz is looking forward to building upon the strong start with “Lono” and hopes to be in consideration for the team representing the U.S. at the Pan American Games being held in Toronto, Canada this July. “I know there is some stiff competition which is really a great thing for the program and the country that we have several very nice combinations vying for those spots,” she explained. As for her test on the big gelding, she was pleased with his performance. “The half-passes were very expressive and nice. He listened very well for the pirouettes. He really just took the leg and didn’t jump out from underneath the aids,” she continued. “He is a very big and powerful horse and trying to get all of that power where you want it can be difficult, but he was great.”

To learn more about the Adequan® Global Dressage Festival and for schedules and ride times, please visit www.globaldressagefestival.com for more information. The FEI CDI5*/3*/1* competition will continue through Sunday February 5, 2015.