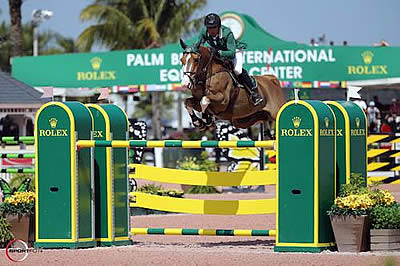 Wellington, FL – March 23, 2017 – El Salvador’s Paulo Santana and Taloubet were the winners of the $35,000 Ruby et Violette WEF Challenge Cup Round 11 during CSI 5* competition on Thursday, March 23, at the 2017 Winter Equestrian Festival (WEF) in Wellington, FL.

Course designer Guilherme Jorge (BRA) saw 55 starters over his first round course for the WEF Challenge Cup and 16 clear rounds. Just ten of the16 clear entries chose to return for the jump-off, where Paulo Santana and his veteran mount Taloubet stopped the clock in 37.47 seconds.

“He feels better than ever,” Santana said of the horse that he has ridden for ten years. “He felt very good in the first round, and I always know that if he leaves the ring trotting or walking, we will get a good jump-off.

“In the jump-off, when there are fewer jumps in front of him, he really chases the jumps,” Santana continued. “The quieter I get, the rounder he goes, and I just need to show him where he is going and he catches every jump. It is way easier to run with him than keep him calm.”

A last minute scratch from this week’s five-star event gave Santana and Taloubet a late opportunity to jog and compete. The rider plans to jump in Saturday night’s $500,000 Rolex Grand Prix CSI 5*, and detailed Taloubet’s fitness regime and preparation as a senior horse.

“He is the kind of horse that is not going to learn anything else,” Santana noted. “We have a protocol for his final career and what he will jump. We just keep him sound and safe. When we come to the show, I do not jump him a lot in the warm-up.

“We keep him in a very high cardio and physical resistance workout,” Santana added. “I actually try to do the same things with him as I do for my workouts. We really try to keep his stamina high.  He is a hot horse, so he works himself just going to the wash rack. He is always tight. We just do what we can to push his edge to be a little bit further. He is a rock; he feels great.”

Kelley Farmer of Keswick, VA and Mindful dominated the Antares High Performance Working Hunter division and captured the championship ribbon. The pair won four out of five classes and placed second in the stake round. Mindful received scores of 87 and 85 over fences, and 89 and 88 in the handy and stake rounds.

Mindful, a coming 13-year-old Hanoverian gelding by Graf Grannus, is no stranger to the winner’s circle. Owned by Selma and Ken Garber’s Kensel, LLC, the gelding, who previously competed as a jumper, has several USEF Horse of the Year awards and a long list of USHJA International Hunter Derby wins to his credit.

“We have owned Mindful for four years, and we purchased him when he was a jumper,” said Selma Garber. “The transition to the hunters was very easy for him. He started out on top and has pretty much stayed there. He is extremely amenable; whatever you want to do he agrees, especially when it concerns food.”

Speaking of Farmer’s trips on the gelding, Garber continued, “Kelley had great rounds on him this week. She is such a steady performer. I love how consistent and smooth Mindful is. Plus, he has an incredible mind. Mindful and Kelley don’t disappoint!”

MTM Hands Down, owned by Beechwood Stables, LLC, and Peter Wylde of Lake Worth, FL secured the reserve title, placing second and fifth over fences, as well as winning the stake round with a score of 89. MTM Hands Down is a 14-year-old Warmblood gelding that has had a strong showing at the 2017 winter circuit in Wellington, earning championship honors in the Antares High Performance Working Hunter and the CWD Saddlery Performance Hunter 3’6″ divisions.