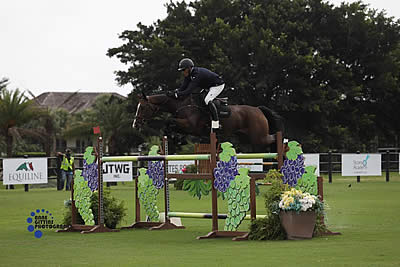 Wellington, FL – June 8, 2020 – The long-awaited ESP June Spring Series officially kicked off last week. It started with the ESP June Equitation Day on Wednesday, June 3, followed by four full days of USEF “A” National & Jumper 4* competition. The weekend culminated with the $24,999 HorseLinc Grand Prix (plus $3,800 in add back money) on the Derby Field during which 59 competitors contested the track, and Paul O’Shea aboard Squirt Gun came out on top. O’Shea of Wellington, FL piloted Eye Candy Jumpers, LLC’s mount around the jump-off course to victory in just 44.726 seconds. “The field was fantastic. After all those rounds, the footing was still perfect,” commented O’Shea after the class. “It’s actually incredibly to get to jump out here. The horses always learn a lot out here because there’s just so much to look at. So, it’s a great opportunity.”

O’Shea and his team will continue competing in Wellington next week for the ESP June II show and then travel north: “After next week we’ll go up to Kentucky for Split Rock and then Tryon for the summer. That’s the plan at the moment. We’re certainly glad to be back competing again.”

Claiming second place was Wellington, FL’s Alberto Michan and his entry Cosa Nostra after crossing through the timers in 45.677 seconds. Emily Ward of the United Kingdom rounded out the top three once she completed the jump-off in 45.695 seconds aboard Millioninmind, owned by Stephen Barnes. The track was designed by Puerto Rico’s Hector Loyola and proved tough for many, as only 13 competitors made it to the second round.