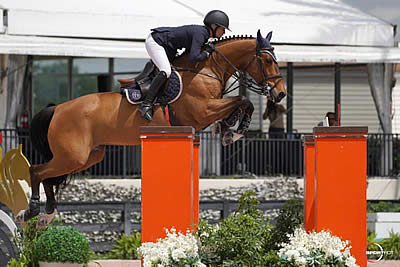 In Thursday’s featured class, 69 entries tried their hand at the track, set in the International Ring of the Adequan® Global Dressage Festival (AGDF) showgrounds by Germany’s Olaf Petersen, Jr. Of those starters, 12 qualified for the jump-off round, and 10 elected to return to face off over the short course.

Derbyshire and her mount Luibanta BH, owned by Gochman Sport Horses, LLC, were the final combination to jump off, and when they entered the ring, the time to beat had been set at 42.72 seconds by the sixth entry to return, Switzerland’s Martin Fuchs riding Chica BZ.

Fibonacci was awarded three first places and two seconds in the five division classes and was moved up in the rankings several times after the model. The gelding has only competed a total of five times over the 2019 circuit but has made an impression in the division having earned champion three times and reserve champion twice.