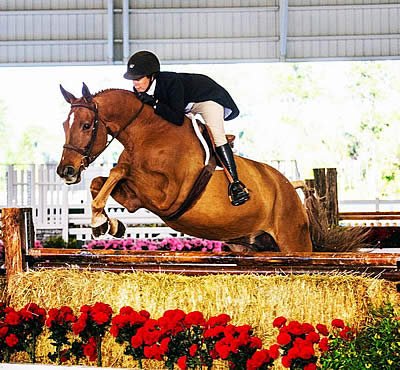 West Palm Beach, FL (January 9, 2017) – Week 1 of The Ridge at Wellington’s 2017 Palm Beach Series wrapped up Sunday, January 8th following 5 days of hunter and jumper competition at Jim Brandon Equestrian Center, crowning champions and reserve champions in a variety of divisions, from Mini Stirrup and Jumper Classics to Grand Prix and International Hunters. Envisioned as a compliment to Wellington’s booming winter equestrian season, the Palm Beach Series expanded its offerings in 2017 while still focusing on providing a world-class competition and show experience in a relaxed, utopian atmosphere.

In addition to its full divisions for hunter and jumper riders each week, the Palm Beach Series’ multifaceted offerings also include unique equestrian competitions such as the Turf Tour, USEF Equitation Tuesdays at The Ridge’s home farm, and Hunter Derby Days. Under the scrutinizing gaze of judges Scott Fitton, John McQueen, Linda Andrisani, and Diane Carney, January 6’s Hunter Derby Days competition showcased some of the sport’s top hunter riders and trainers effectively navigating the three Derby divisions over all natural obstacles in the oversized covered arena. The morning’s $5,000 USHJA National Hunter Derby was topped by Kim Barone and Dolce Vita of Raven Ridge Farm, who was also awarded a woven belt from sponsor Boy-O-Boy Bridleworks. For the afternoon’s $15,000 USHJA International Hunter Derby, Lousie Serio and Rock Harbor came out on top following two rounds of competition with some of the hunter and jumper arena’s top names, including Peter Pletcher, Kelly Farmer, and Molly Ashe-Cawley. Serio’s exceptional performance, in addition to the top placing, earned her the EQUO Style Award, which included a chic top from the line of equestrian and leisure sportswear and a celebratory bottle of Vueve Clicquot champagne.

“He felt so made, ready, and knew his job,” said Serio of her winning mount, Rock Harbor owned by Jennifer Burger. “This was his first time out this season, and he is exceptional in the handies. His compact build allows him to make the turns with ease. The facility was fantastic, with exceptional footing and brought much needed Hunter Derbies to Florida.”

The final class of the evening was the $5,000 USHJA Pony Derby, a first for The Ridge at Wellington and the Palm Beach Series. A competitive and adorable selection of small, medium, and large hunter ponies and their riders navigated a scaled down version of the National and International Hunter Derby Course, with Kat Fuqua taking the Grand Champion honors aboard Goodhill’s Arresting Charm. Fuqua swept the Derby, also piloting Small Suggestion and Captain America to Reserve and Third place in The Ridge’s inaugural Pony Derby.

While Friday was for the Hunters, Saturday was all about the excitement and precision of the show jumper. The Palm Beach Series’ headline class is the $15,000 Grand Prix, held each week and presented during Week 1 by Dave Corbin and Jim Corbin of Illustrated Properties. Florida’s usually sunny skies opened up above Wellington, but The Ridge’s exhibitors stayed dry and in the saddle under Jim Brandon’s oversized covered arena. With top international show jumpers like Pablo Barrios and Todd Minikus testing out the course design, footing, and atmosphere of the first Palm Beach Series Grand Prix, a number of double clear rounds resulted in a tight battle for the lead. Despite a sudden and intense storm cell that swept in during his round, Luis Fernando Larrazabal and Atlodetto kept their composure and rode a double clear to finish on 36.067, taking the lead and holding it through the end of the class. Pablo Barrios rode Zara Leandra and ASD Farfala to second and third, just tenths of a second from Larrazabal’s time with a 36.357 and 36.746. During Week 2 riders will for the first time have the luxury of riding in two Grand Prix classes: Friday’s 1.40m class and Saturday’s 1.45m class with $30,000 in total prize money. Full schedules for Week 2 can be found online at www.TheRidgeFarm.com.

While the Hunter Derbies and Grand Prix were the main attractors during Week 1, the Palm Beach Series also hosts full hunter and jumper divisions each week. Teeny Tiny Jumpers, Teeny Tiny Mini Prix, Level I Jumpers, .65m-1.30m Jumpers, Low & High Child and Adult Jumpers, AO/Classics, Thoroughbred Jumper & Classics, Young Pro Jumpers, and full hunter divisions are just a few of the classes offered weekly, Wednesday through Sunday at the Palm Beach Series. New this year The Ridge is offering VIP Hospitality during competition days, with special packages that include continental breakfast and a gourmet lunch buffet in upscale VIP areas overlooking competition arenas. Concessions are also available onsite, in addition to a cash bar, courtesy of Wellington Hospitality Group. VIP packages can be purchased by visiting wellingtonhospitalitygroup.ticketleap.com or by calling 561 792 9292.

“All of The Ridge’s shows are created with the horse in mind, from our open in-gate policy to the challenging but practicable course designs,” said founder of the Ridge and US Olympic Show Jumper Nona Garson. “Especially in the debut of our 2017 Palm Beach Series, we want to make showing less of a strain on horses and humans alike. We are thrilled to be working out of Jim Brandon Equestrian Center and to welcome our competitors, sponsors, and partners, new and old, for what promises to be an exciting season of equestrian competition.”