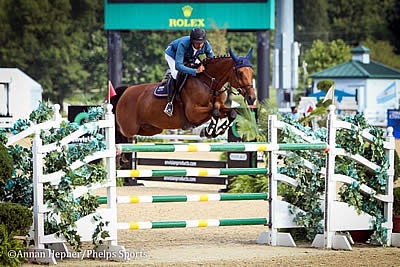 Lexington, KY – July 27, 2017 – Pablo Barrios proved once again that he is the “King of the Ring” in the Rolex Stadium by besting a field of twenty-six competitors to win the $25,000 Hagyard Lexington Classic. David Beisel gave the Venezuelan Olympic veteran a run for his money by piloting two mounts to the jump-off and taking the second and third place ribbons. Lacey Gilbertson and Sharn Wordley rounded out the top five places in the ten horse jump off, placing fourth and fifth, respectively.

Athletes were especially competitive as the $25,000 Hagyard Lexington Classic was the third class in the Hagyard Challenge Series. The series consists of seven grand prix classes held in 2017 at the Kentucky Horse Park. Following the final event, a cash prize of $50,000 will be awarded to the rider accumulating the most points throughout the series.

Although Barrios was part of a handful of riders to only compete one horse in the class, he was confident that he and long-time mount Zara Leandra had what it took to win. The 13-year-old Dutch Warmblood mare, who is owned by Barrios, easily navigated the course, designed by Oscar Soberon. The pair has already had a successful summer with a win in the $50,000 Country Heir II Grand Prix and a second-place finish in the $25,000 Rood and Riddle Grand Prix, both at the Kentucky Horse Park.

Barrios, who has previously received the $50,000 purse for winning the Challenge Series in past years, knows the cash prize is up for grabs as three different riders have won the three classes so far this year.

As hunter competition continued on the second day of the Kentucky Summer Horse Show, Jaime Gibson of Ocala, Florida rode the 9-year-old mare Cora to the Grand Open Hunter Championship. Owned by Debbie Smith of Beverly Hills, Florida, Cora won two over fences class and the handy, and placed second in an over fences and the undersaddle class in the Green Conformation Hunter division. They picked the division’s championship prize alongside Tim Goguen, who tied for the title with Garland Alban’s Decoy.

Gibson started riding the talented mare during the winter season and the pair competed in the Ocala circuit and at Devon before heading to the Kentucky Horse Park for their biggest win to date.

The Grand Open Hunter Championship is sponsored by Visse Wedell of Wedell Real Estate. Earlier this year, she noted, “I sponsor all of the Grand Hunter Championships at the Kentucky Horse Shows because I think it’s important to go back in history where they used to do it a lot. They don’t do it at many horse shows anymore and I thought that it would be a nice thing for riders to go home with a trophy.”