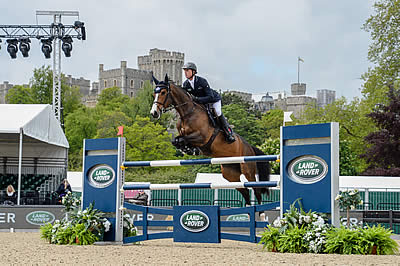 Virtual Windsor 2020 launched a month ago and already the number of visitors and entries to competition has far exceeded expectations, with a total of 4,266 entries across the multitude of classes. Organisers of CHI Royal Windsor Horse Show, one of Her Majesty The Queen’s favourite annual events, have announced the packed official programme for Virtual Windsor 2020 ‘Show Week’.

‘Show Week’ presents a unique opportunity for the equestrian community to relive some of the most exciting equestrian competitions of recent years, featuring some of equestrian’s best athletes, such as USA’s Kent Farrington, along with Olympic gold medallists Ben Maher MBE, Scott Brash MBE, and Charlotte Dujardin CBE. Highlights include the 2018 and 2019 Rolex Grands Prix, last year’s hotly contested CSI5* Falcon Stakes, and the Al Shira’aa Grand Prix Freestyle to Music. Viewers will also be able to witness the best moments from the Land Rover International Driving Grand Prix and stunning displays from the Household Cavalry Musical Ride and the Royal Horse Artillery, all in the comfort of their own homes.

Closely following the live event timetable, the Virtual Windsor 2020 Show Week will bring the judging of the online Showing classes to life, with Royal Windsor Horse Show commentator, Nick Brooks-Ward, interviewing judges Nigel Hollings, John Peacock, Linda Lawrance, Antony Fanshawe, and Lord Charles Beresford, along with special guest judges Alan Titchmarsh MBE and Annabel Brooks-Ward MFH. The judge of each class will be interviewed, and the result announced during the course of the stream.

On the evening of Saturday 16 May, viewers will have the chance to relive last year’s highly acclaimed 2019 Victorian Pageant – a musical, military, and equestrian extravaganza, featuring the voices of Academy Award winner Olivia Colman CBE, Simon Callow CBE, Alan Titchmarsh MBE, alongside music from renowned British score writer Debbie Wiseman OBE. The stunning display, set in the iconic grounds of Windsor Castle, will be streamed online as a one-off performance. Royal Windsor Horse Show sponsor AMAALA is supporting a ‘Pageant Watch Party’, and viewers are encouraged to take part at home.

On Sunday 17 May, Virtual Windsor 2020 will host the Online Showing Championships supported by Rosettes Direct, with the winners of each Showing class going head-to-head to claim the coveted Championship title. Prizes have kindly been donated by RWHS exhibitors, with the champion receiving a Voltaire Design bridle and a magnum of wine from The Magnum Company to the winning owner. Holland Cooper has also supported the Championships, with a jacket presented to the Best Turned Out. All finalists in the Online Showing will receive a Royal Windsor Horse Show rosette, kindly made by longtime RWHS supporters Rosettes Direct.

Show Week at Virtual Windsor 2020 will also include the launch of an interactive map of the showground, where visitors can tour their favourite shopping destinations. The map, which features all the shops usually found at Windsor in their usual places on the showground, will allow visitors to virtually explore the Show and enjoy all the usual Shopping on-site and benefit from some special virtual show offers.

Show Director, Simon Brooks-Ward, commented: “The organising team has done a tremendous job to put on what we believe will be a spectacular Virtual Show Week. I have already seen some very strong entries from all around the world, so the judges are certainly going to have a tough job on their hands. Though the Show could not go ahead in its usual format, Virtual Windsor 2020 has really shown how exceptional the equestrian community is and I would like to thank all those that have supported us and got involved.”