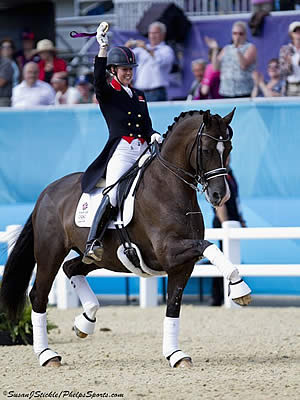 Wellington, Fla. – Sept. 19, 2019 – Featuring the dressage superstar Valegro on the screen for fans around the world to enjoy, Valegro: Sculpting the Legend is now available on demand only on Horse & Country TV. The exclusive documentary tells the heartwarming story of the citizens of Gloucestershire, England and their inspiration to honor Valegro with a bronze sculpture.

In November of 2017, Valegro’s hometown of Newent celebrated one of the world’s most famous horses with the launch of a project that would commemorate his brilliance for years to come. A half life-size bronze statue of Valegro was to be constructed to proudly stand in the center of the Gloucestershire market town, in celebration of the gelding’s achievements representing Great Britain.

The film highlights the creation of the half life-size bronze statue, designed and commissioned by world renowned equine sculptor, Georgie Welch, who was also tasked with producing 12 limited-edition bronze miniature models. Each of the smaller sculptures, which stands around 11 inches high, will be sold and one raffled in order to raise funds for the exciting masterpiece.

In partnership with Charlotte Dujardin, Valegro, who is owned by Carl Hester and Roly Luard, has accumulated three Olympic gold medals and hold multiple world records in all three divisions: the Grand Prix, the Grand Prix Freestyle, and the Grand Prix Special. Great Britain’s equestrian dream team of Dujardin and Valegro closed the competitive chapter of their partnership at a retirement ceremony held at the CDI-W London Olympia Horse Show in 2016, but the excitement of their performances is still talked about around the world.

Welch takes viewers through the various processes of making the miniature bronzes before sitting down with Hester, Dujardin, and the other people involved in the project for interviews, in addition to paying a visit to Valegro himself.

“Valegro was a horse of a lifetime – he is a complete legend,” his rider, Charlotte Dujardin, stated. “This lovely documentary gives a fascinating insight into the horse that had brought so much global awareness to the sport of dressage and has a place in my heart forever, as well as for many of you.”

To mark the start of the project, Valegro, Dujardin, and his groom, Alan Davies, made an appearance to the town center, meeting some of the locals who would enjoy the iconic structure for years to come.

Don’t miss out on this exclusive behind the scenes look at the process that has gone into Valegro’s sculpture, recognizing the dressage legend’s achievements. Head on over to Horse & Country TV to subscribe and watch the event’s highlight show to see their podium finishes.