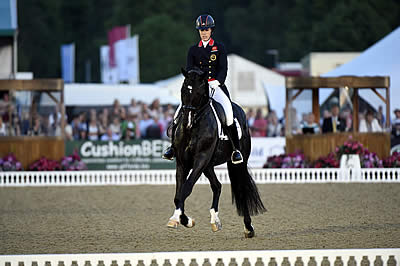 Some of the world’s most esteemed riders will take part in the National Dressage Grand Prix Freestyle invitational competition at Royal Windsor Horse Show 2016 where they will perform their routines on Wednesday 11th May. For many of the riders, this highly-anticipated exhibition will be the last chance to polish off their choreography in front of a live audience ahead of the summer Olympic Games in Rio.

All eyes will be on Olympic favourite, Charlotte Dujardin, who will be returning to the iconic Castle Arena, riding the stunning chestnut gelding, Barolo. Charlotte’s last appearance at Royal Windsor Horse Show was in 2014, when she put on a victorious performance aboard Carl Hester’s London 2012 Olympic gold medallist, Uthopia.

Charlotte will have stiff competition in what is shaping up to be a stellar class. One of the biggest challengers will be reigning Royal Windsor Horse Show champion and fellow Team GB rider, Carl Hester, riding the world-class Nip Tuck, a combination looking to repeat last year’s triumphant performance which saw them score an impressive 75.38%.

Michael Eilberg, part of the silver medal winning 2015 European Championship team with Charlotte and Carl, will be adding to the excitement around this Grand Prix Freestyle event, along with others pushing hard to impress the Team GB selectors ahead of Rio, such as Olympic gold medallist Laura Tomlinson, Pippa Hutton, Spencer Wilton, Hayley Waston-Greaves and Ryan Todd.

General entry to Royal Windsor Horse Show will be free of charge on Wednesday 11th May; however, due to popular demand, reserved seats to watch this unmissable class are available to buy in advance and are expected to sell-out fast.  Tickets are on sale now and can be purchased on www.rwhs.co.uk or via the box office on 0844 581 4960 from the UK and +44 (0) 121 796 6290 internationally.

Entries for International Jumping will be announced later in April.

The Show will take place from 11-15 May 2016. Over 50,000 visitors are expected to attend the 74th year of Royal Windsor Horse Show which offers its audience astounding displays in the main Castle Arena, such as the DAKS Pony Club Mounted Games and The Shetland Pony Grand National. As well as the equestrian competitions and activities, there are over 220 shops in the Shopping Village, with a wide range of goods for sale, from jewellery and fashion, to food and drink. Her Majesty The Queen has attended every year since the Show started in 1943 and it is the only time of the year that the private grounds of Windsor Castle are open to the public. Royal Windsor Horse Show is organised by Windsor Equestrian Promotions Ltd, a part of HPower Group, also organisers of Olympia, The London International Horse Show www.hpower.co.uk.