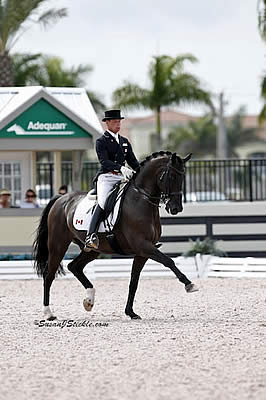 Wellington, FL – January 4, 2014 – Equestrian Sport Productions (ESP) announces the following riders have been invited to the $5,000 Junior/Amateur Jumper Speed Exhibition class, sponsored by EnTrust Capital. The class follows the $125,000 Trump Invitational Grand Prix, presented by Rolex, and is held at The Mar-a-Lago Club on Palm Beach Island on Sunday, January 5, 2014. The exhibition class gives junior and amateur riders a special opportunity of competing at this unique event. Adding to the entertainment at this year’s event will be a dressage exhibition by Olympian David Marcus.

An elegant dressage exhibition will be performed by Canadian Olympian David Marcus on one of his top horses, Don Kontes, during Sunday’s festivities. “I look forward to introducing dressage to the spectators at the Trump Invitational,” Marcus said. “The Mar-a-Lago Club is a spectacular venue, and I think it will be a great experience!”

Born in Omaha, Nebraska, David Marcus began riding at the age of seven. In 1996, he made a decision to take the sport to the next level, heading north of the border to Canada to train with Olympic-level coaches while also pursuing his university education. Marcus represented the United States in five North American Young Riders’ Championships, winning silver and bronze medals.

At the end of 2011, Marcus officially became a Canadian citizen, and immediately began representing his new home country successfully at the Grand Prix level with Chrevi’s Capital and Don Kontes. In his Canadian Team debut at the 2012 Nations Cup at the Adequan Global Dressage Festival, Marcus and Chrevi’s Capital proudly wore the maple leaf, scoring a win for Canada. Marcus drew on that top performance and represented Canada at the 2012 London Olympic Games.

Following London, Marcus continued to excel in international competition, topping the 2012/2013 North American World Cup League and enjoying impressive victories at such prestigious events as CDI-W Dressage at Devon, the CDI-W at the Adequan Global Dressage Festival and, most recently, the $20,000 Royal Invitational Cup at Toronto’s Royal Horse Show.

Marcus has his sights firmly set on the 2014 Alltech FEI World Equestrian Games in Normandy, France, and, in preparation, will compete throughout the winter circuit in Wellington at the 2014 Adequan Global Dressage Festival.

With the addition of the $5,000 Junior/Amateur Jumper Speed Exhibition class, sponsored by EnTrust Capital, as well as a grand prix dressage exhibition, the Trump Invitational, presented by Rolex, is sure to be an exciting, action-packed day.

The Trump Invitational, presented by Rolex, serves as the kick-off party for the 2014 FTI Consulting Winter Equestrian Festival, the 12-week circuit that runs at the Palm Beach International Equestrian Center in Wellington on January 8 – March 30, 2014.

Mar-a-Lago, the former Marjorie Merriweather Post Estate purchased and restored by Mr. Donald Trump in 1985, is one of the most spectacular mansions in the world and in the national register of historic places and a designated U.S National Landmark. The Trump Invitational, presented by Rolex, is the only equestrian event ever held on Palm Beach Island. Ivanka Trump, Georgina Bloomberg, and Paige Bellissimo are co-chairs of the event.

Tables are selling quickly – if you would like to buy a table, please call Anne Caroline Valtin as soon as possible at 561.784.1133 or email annecaroline@equestriansport.com. Tables will be fulfilled on a first-come, first-served basis. There is no general admission to this event.