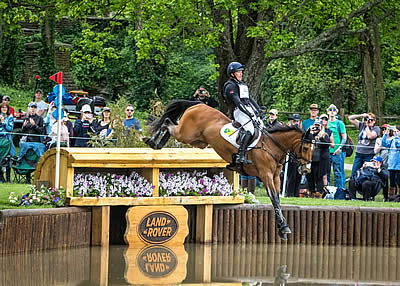 (LEXINGTON, KY) – April 27, 2019 – The sun shone down on the Land Rover Kentucky Three-Day Event cross-country course, set by Derek di Grazia, with Great Britain’s Oliver Townend showing why he is the defending champion, producing a brilliant clear round and just 1.2 time faults, despite losing a shoe half way around the course. Townend remains in the lead on a score of 25.3 heading into the final show jumping phase. Much to the delight of the home crowd, USA’s Boyd Martin made the course look easy aboard Tsetserleg, just one of only four partnerships to finish inside the optimum time of 11.20, to end the day in second place. The Rolex Grand Slam of Eventing live contender, Tim Price (NZL), climbed up to third position with the stunning bay gelding, Xavier Faer, keeping his dressage score of 30.9.

The rumours of the technically challenging course proved to be true, with the first three horse and rider combinations unable to complete the course resulting in elimination. USA’s Will Coleman was the first rider to go below the 11.20 time set, with Olympic bronze medallist Phillip Dutton producing a masterclass round with Z finishing two seconds under the time.

Townend commented on his ride: “Once I realised the shoe had gone, I was conscious of having to balance more and be more conservative than I usually would be.”

“He was certainly a bit keener than he was last year; he felt stronger and was definitely up for it; his ears were pricked all the way. He made his own mind up over a couple of the jumps and at times I felt like he was more in control than I was – he did his job well and is becoming an incredible horse.” — Oliver Townend, Great Britain

The history books could be re-written if Oliver Townend produces a clear round in the show jumping, as he will become the first British equestrian to win back-to-back Land Rover Kentucky Three-Day Event titles. Just 8.2 penalties separate the top five athletes, which include the World No.1, the 2016 Olympic bronze medallist, the FEI World Equestrian Games™ team gold medallist, and the current Rolex Grand Slam of Eventing live contender, so there will be no room for error in what will be a closely fought competition.