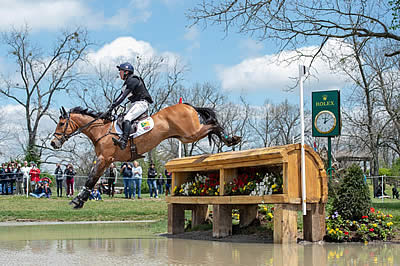 30 April 2018, Lexington, USA – Great Britain’s Oliver Townend produced a precision round of show jumping in the final phase of the 2018 Land Rover Kentucky Three-Day Event to secure his first Kentucky win and set him just one event away from winning the coveted Rolex Grand Slam of Eventing prize.

From the 46 horse and rider combinations who started the competition on day one, 32 horses made it through to start on the final day of competition, with an international field of world-class riders from the USA, Canada, Great Britain, Ireland, Australia, Poland and Germany.

With just one fence separating the top four placed competitors in the show jumping, the enthusiastic patriotic spectators in the Rolex Stadium enjoyed a thrilling sporting display.

Oliver Townend was up against many of eventing’s finest riders, including world number one and reigning champion Michael Jung, who had returned to this year’s Land Rover Kentucky Three-Day Event in a bid to try to set a new record by winning the event for a historic fourth consecutive year, aboard his same horse, FischerRocana FST.

Speaking after his victory and looking ahead to the Rolex Grand Slam of Eventing challenge, Townend said: “Today was incredible. I will just take it one event at a time, but I have two great horses next week at Badminton and it is all to play for now.”

Rolex and the Kentucky Three-Day Event have a long and distinguished history, with Rolex as Title Sponsor for over three decades from 1981 to 2017 and proud to be continuing its long-term partnership as Official Timepiece. In 1998 Rolex Kentucky became the third annual CCI4* event in the world and remains the only four-star competition on the American continent. Rolex’s established support has seen the event develop into one of the most prestigious in the world, with top riders from around the globe now vying to compete there.

Since 2001, Rolex has actively supported excellence in the discipline of eventing through the Rolex Grand Slam of Eventing – an award presented to any rider who consecutively wins at the three annual events of the Land Rover Kentucky Three-Day Event (USA), the Mitsubishi Motors Badminton Horse Trials (UK) and the Land Rover Burghley Horse Trials (UK). To this day, the Grand Slam has only been won twice, in 2003 and more recently, in 2016.