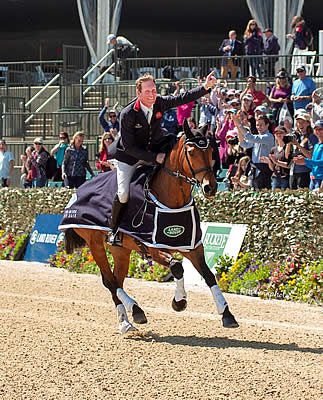 Jung, reigning Olympic champion, has held top spot since the middle of 2015, but he has now been replaced by 35-year-old Townend following his thrilling victory at the Lexington (USA) CCI4* last weekend.

Townend (35) was briefly world number one in 2009 – a stellar year for him when he won the Badminton (GBR) CCI4* and Burghley (GBR) CCI4* titles – and he now reclaims top spot.

And it comes on the eve of this year’s Badminton, where a Townend victory would see him emulate Jung and Pippa Funnell (GBR) in winning the Rolex Grand Slam for consecutive victories at Burghley, Kentucky and Badminton.

“It’s very good. I like the sound of that!” said Townend, following release of the latest FEI World Eventing Rankings.

“It has been a while. I only had a fleeting spell as number one once upon a time, and especially to knock someone off who has been there for so long is very, very good.”

Jung, who was runner-up to Townend at Lexington, is now at number two, just one ranking point behind, with Tim Price (NZL) third, Gemma Tattersall (GBR) fourth and Ros Canter (GBR) fifth.