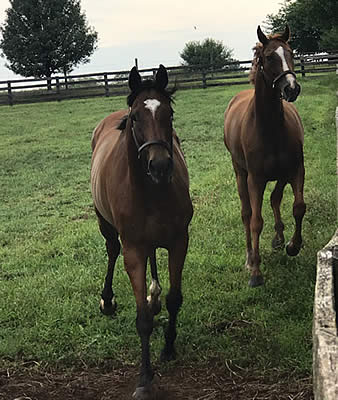 The Pizza Man (left) and Work All Week.

Work All Week, a seven-time stakes winner, was owned and bred by Richard and Karen Papiese and campaigned by trainer Roger Brueggemann. The Illinois-bred son of City Zip was the champion male sprinter of 2014 after capturing the 2014 GR 1 Xpressbet Breeders’ Cup Sprint. Work All Week was retired from racing in 2015 at the age of six due to a stress fracture in his right knee with a 13-4-1 record from 19 starts and earnings of $1,511,071. In addition to his Eclipse Award as outstanding male sprinter, Work All Week is a two-time Illinois Horse of the Year.

The Pizza Man, another star for Papiese and Brueggemann, is a multiple GR1 winner. By English Channel out of the Lear Fan mare I Can Fan Fan, The Pizza Man is the only Illinois bred to claim victory in both the GR1 Arlington Million (2015) and the GR1 Northern Dancer Turf Stakes (2016). He retired from racing in 2017 at the age of eight after being diagnosed with a chip in his left front ankle. He closed his career with 17 wins from his 36 starts and earnings of 2,158,941. Since retiring, The Pizza Man enjoyed a second career as a stable pony for his former trainer.

Syndergaard, owned by the partnership of Eric Fein, Christopher McKenna, Harris Fein, Guri Singh, and Jerry Walia, was named after New York Mets pitcher Noah Syndergaard. The New York-bred son of Majesticperfection – Magic Belle, Magical Thinking, was a dazzling 2-year-old under the tutelage of trainer Todd Pletcher, cinching his maiden outing at Saratoga and going on to capture the Funny Cide Stakes over the same oval. That same year he was second in the GR1 Champagne, which led to a start in the 2016 GR1 Sentient Jet Breeders’ Cup Juvenile, where he ended up 5th. He later moved to the barn of trainer John P. Terranova II. This year, the chestnut gelding was retired after his last start June 6 at Belmont Park with 17 Starts, 3 Wins, 4 places, 2 shows, and earnings: $477, 269.

“We are absolutely thrilled,” said Old Friends President Michael Blowen. “I wish everyone could see the absolute joy expressed by The Pizza Man and Work All Week as they celebrate in their paddock. And Syndergaard is just gorgeous. Thanks to their owners for trusting us and their fans for all their support.”